The mystery noticeboard which appeared last week on the corner of Headington Road and Headley Way acquired its first notices on Monday – posters for performances at the Oxford Playhouse and the New Theatre. 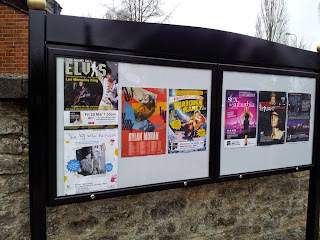 The fire in Colemans Hill, which was breaking news as last week’s Headington Headlines went to press, is being treated as arson. Three people were taken to hospital for treatment.

Police released an image of a man they want to question in connection with an assault that happened in The White Horse on Sunday 1 March.

Lovers of the 29 Old High Street saga will be both delighted and dismayed, even angry, to learn that Martin Young will not be prosecuted for failing to bring his property up to standard because the Council has run out of time for the legal process. Local taxpayers will now have to pick up the bill of at least £16,000, including Mr Young’s costs.

The decision to remove the solar panels from the roofs of the new houses facing Bury Knowle Park (see HH204 or this Oxford Times article) has triggered one of the biggest local outcries since the suggestion of building on the Waitrose car park. Posts on the e-democracy forum queried the need to remove the panels, saying the need for renewable energy outweighed and visual impact. You can even sign a petition calling on the Council not to remove them. However, Friends of Old Headington and Friends of Bury Knowle Park take the opposing view, while Cllr Roy Darke has said on the forum that he believes the panels will now stay.

The City Council, which is responsible for naming new streets, is asking Barton & Northway residents for suggestions for the names of over 30 new streets in the Barton Park development. The Barton Community website says you can tweet your suggestions to @oxcitycommunity with the hashtag #BartonSNN. There are also links for email, facebook, and even a good old-fashioned drop-in box.

Two sheds in Risinghurst (aka Headington, according to the Oxford Mail) caught fire late on Saturday night. Arson is suspected.

Here’s my weekly round-up of local news for 25 February – 3 March.

From this morning (4 March) Beaumont Road will be closed from Quarry Hollow to Green Road while the County Council instals a new surface water rising main. The closure is scheduled to run until 16 April.

Headington Action (@HeadingtonA) organised a well attended and enthusiastic meeting when it was agreed to go ahead with producing a Neighbourhood Plan for Headington. Cllrs @RuthWilk and @DavidRundle have published a report of the meeting. This is the start of a long process on which I and others will try to keep you up to date.

Two days later a group aiming to help develop an integrated transport strategy for Headington met for the first time. The inaugural meeting was also organised by @HeadingtonA.

The Post Office letterbox in All Saints Road was the object of a possible arson attack last Sunday (24 Feb) although the cause of the small fire is unclear.

Also last Sunday there was a robbery at Threshers off-licence in Cherwell Drive, Marston.

Headington’s Blockbuster store is going to close and will become a Morrison’s supermarket. There are reports too that the owner of the closed Crown and Thistle pub in Old Road may be looking at alternative uses for the building.

Our very own Dee Sinclair, City Councillor for Quarry & Risinghust and candidate for the new Headington and Quarry Division in the County Council elections in May, is to be the next Lord Mayor of Oxford from May this year. Come on Dee! With such a high profile you’ll just have to get that @delia_sinclair twitter account going!

@ThriveBarton‘s work in Barton is the subject of an article in the Newsletter of the Volunteering & International Psychiatry Special Interest Group of the Royal College of Psychiatrists. It’s on page 5.

A man from Aldbarton Drive, Barton was sentenced to four months jail for dangerous dogs offences. Three people had been attacked and needed hospital treatment.

The two men who were in court on charges of rape in Bury Knowle Park (see original press report) were acquitted.

The City Council’s Sites and Housing Plan was formally adopted on 18 February – the end of a long process. The definitive version is here.

So far only Oxford Civic Society @oxcivicsox has commented on the latest planning applcation for 29 Old High Street. They are broadly supportive. Application ref: 13/00311/FUL.

Lime Walk was closed between London Road and All Saints’ Road for a short time on Friday for emergency water main repairs.

It’s not surprising that the West Barton development contiues to make the news. Under the headline “Oxford ring road junction plan ‘recipe for disaster'” The Oxford Times website on Tuesday quoted “some motorists” opposing the idea of reduced speed limits and a traffic light controlled crossing on the Ring Road north of the Headington roundabout. “Some motorists” were in fact the Secretary of the City of Oxford Licensed Taxi Association and a driving instructor.

Oxford City Council released the results of its consultation exercise on future building development in the City. The document is 414 pages long. The preferred option for Headington car park is to build over, retaining (some) parking beneath. The H&M e-democracy forum has more.

The OXSRAD sports centre closure was averted after an outstanding debt was settled.

A firefighter was injured when the service was called out to a suspected arson fire at West Hill Farm, The Ridings, Shotover, at about 5.45pm on Sunday. The house was boarded up which meant access was difficult. Four fire engines and the water carrier from Wheatley attended the scene.

The campaigners who wanted to preserve the pedestrian subway in Headington made the news this week, one year on from its closure. Despite there having been no accidents at the light-controlled, 20mph-restricted, surface-level crossing with a traffic island halfway across protected by bollards they still regret the loss of the smelly, poorly-lit and potentially dangerous subway.