A newborn baby boy was found in a toilet in the JR Hospital on Monday. Police launched an appeal to help find the mother; she was later found and was looked after by the hospital. Mother and baby were later said to be doing well.

The work to make a surfaced path along Cuckoo Lane between Franklin Road and Pullen’s Lane, originally due to start last Monday, will now start today (25 March). Local residents and councillors had a site meeting last Tuesday to discuss the project. This post on the e-democracy forum has a link to the notes of the meeting, with explanatory pictures.

Dora Carr Close in Northway is one of five Oxfordshire building projects nominated for the RIBA South region awards 2019. All five are in Oxford itself. The regional winners will be chosen in May; the winners go forward for a National award, and from among those the Sterling Prizewinner is selected. To many people’s surprise, Westgate is one of the other nominated developments.

Hundreds of flyers for Society Hair Studio, of New Road in the city centre, were found dumped on the C S Lewis nature reserve in Risinghurst.

The Oxford Mail reports that house-builders Redrow have revealed their designs for the second phase of Barton Park. The company was given the job in February last year (see HH355). As I write this I haven’t seen the details; Redrow are best known for their very traditional designs but I have heard suggestions that their Barton Park development will be more in keeping with a modern-looking development.

Your weekly round-up of local news for 1 – 7 October .

In an incident that will play into the hands of the anti-Barton Park campaigners in Northway, a 13 year old boy was injured three weeks ago when he was hit by a car at the new light-controlled crossing on the A40. The car driver didn’t stop and the police are belatedly asking for witnesses or information.

A new Couch to 5k programme started on Thursday at Bury Knowle Park. It’s probably not too late to join in; this well-established programme is designed to get you fit with a gentle progression up to running 5 kilometres.

I went to see A2Dominion’s pre-application exhibition of their plans to redevelop the Ivy Lane flats at the JR and to build some new accommodation on Churchill Drive. My brief report is here.

A small scheme (planning ref: 18/01964/FUL) to widen the access to Headington School from Headley Way was approved this week. The wider opening will mean vehicles can drive in from Headley Way without having to wait on the road if another vehicle is trying to get out. The drawing below, submitted as part of the planning application, seems to show that the changed layout won’t interfere with the new cycle track to be built as part of Access to Headington.

The papers have been published for the Planning Review Committee meeting on Monday 15 October to review the refusal of planning permission for the Swan School. The recommendation is to overturn the earlier decision and grant permission.

There will be a public exhibition of plans to redevelop the Ivy Lane flats on the JR site and build more homes at the Churchill. The exhibition is this Tuesday (2 October) from 4 – 7pm at Arthur Sanctuary House, Sandfield Road. 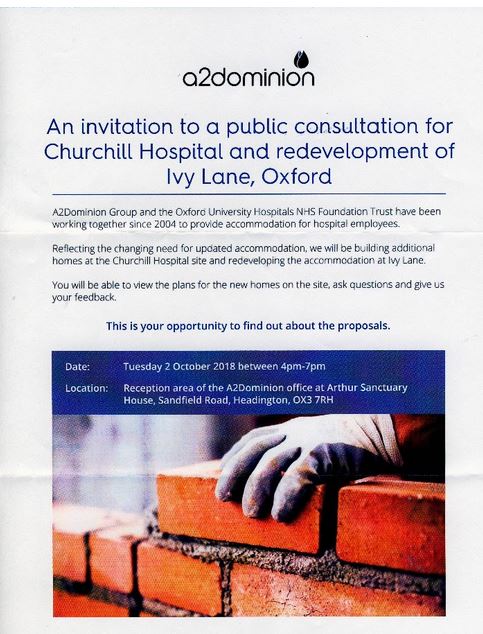 St Andrew’s School @sasastandrews1‘s bid for Tesco ‘Bags of Help’ funding was successful. They can now set up a mobile library!

Great news everyone! Our bid for the mobile library in the #TescoBagsofHelp scheme over the summer got the most votes! Thanks to your support, we can now fund the #StAndrewsPrimarySchool mobile library to boost all children’s reading skills!

The refurbished Six Bells pub in Quarry had a soft opening on Friday with a good report from @RosalindRogers. The full opening is expected this week.

Is this the end of rogue parking in Latimer Road?

So, farewell then, student cars outside Beech House.
If you stay, you’ll be towed away on Monday and fined on Tuesday (if @OxfordshireCC have sorted the CPZ). pic.twitter.com/ZNEGCz5Gi6

A technical omission in the original planning permission for Barton Park means the City Council will have to try to amend the timetable for ‘reserved matters’. They will be hoping there are no objections, otherwise there coud be a lengthy delay.