The Oxford Mail finally picked up on a story that broke on twitter a couple of weeks ago (see HH #135), that a kebab shop is planning to open in the Café Noir site. Predictably they found people to say they weren’t happy about it.

Despite no-one liking it apart from the developers @BartonPark_ and (it is claimed) some unnamed people in Barton, the public announcement that Barton West is to be known as Barton Park went ahead. The Oxford Times made much of the name being chosen by children. Local twitter opinion was unimpressed.

À propos of the above, @BartonPark_ is the twitter account previously known as @BartonOxford. The underscore’s needed because it seems Barton Park is the name of a racehorse and @BartonPark is the account of a racing tipster. On the other hand @Barton_Park is an über-posh nursing home in Southport for people who own Bentleys.

The first of two drop-in sessions about the new school for Bayswick Barton West Park took place on Tuesday. The newspaper report doesn’t have much to say other than it happened. The other drop-in is on 2 December – details, and why I think it’s an important issue, here.

The company running the @oxonbike bike hire scheme in Headington and Thornhill (GrandScheme) has gone into liquidation.

Greenpeace staged a demonstration outside the Shell petrol station on London Road on Saturday evening, ptotesting about oil exploration in the Arctic. Peggy Seeger joined them.

Londis owner @sundersandher started a twitter discussion about who sells the cheapest milk in Headington. It seems Iceland have it by 0.5p a litre.

Oxford Brookes celebrated its 50th anniversary this week. For a while it seemed they had mislaid their foundation stone but @RuthWilk asked the Archivist who said it’s “kept along with patterned tiles from the Darcy Building in Estates” and it seems not publicly accessible.

Back in April 2012 Oxford City Council said they intended to refurbish their five tower blocks. Consultations on what they plan to do have been announced. Those that affect OX3 are the Plowman Tower, Northway in the Tower Play Base on Tuesday 19 November from 12.30pm to 2.30pm and 5.30pm to 8pm and the Foresters Tower, Wood Farm in the Children’s Centre on Wednesday 20 November from 2pm to 8pm.

Work on the long awaited Marston cycle track from Edgeway Road to Fairfax Avenue is due to start on 29th July.

The last of the currently-planned @Oxonbike stations opened at Oxford Brookes Gipsy Lane site on Monday. See my blog post for exact locations, pictures and links.

As expected, Crown News morphed into W H Smith Local. @HeadingtonNews has the history of the shop, which has been a W H Smith before. 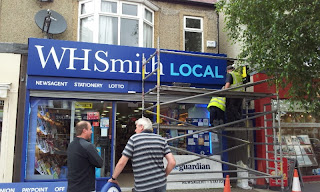 Even more of an institution, Café Noir closed this week after 24 years’ trading. The owners cite rent increases as the last straw.

The planning application for housing on the Barton Road cricket ground was approved.

The County Council’s latest proposals for new bus lane arrangements at the Headington roundabout & London Road are out for consultation. There’s a drop-in session with County officers on 18 July, 4 to 8pm at Quarry Village Hall. More details in this blog post.

More consultation, this time on County proposals to introduce a £2 charge at Thornhill and Water Eaton P&R for stays up to 11 hours. The 11-24hr charge is set to go up from £3 to £4 with corresponding increases for even longer stays. The consultation period runs to 31 July.

Paralympic gold medal winner rowing cox Lily van den Broecke is an ex-pupil of @HeadingtonSchool, which gives me an excuse to report the repainting of her gold post-box even though it’s not in OX3.

A complaint about a pot-bellied pig made at Risinghurst and Sandhills parish council will be referred to the City’s Environmental Services.

The local branch of CAMRA is pressing for a new pub to be included as part of the Barton West development.

A quiet week on the Headington & Marston e-democracy forum this week with only two active topics:

The Headington Festival @HeadingtonFest on Sunday was a great success, with sunshine and plenty of stalls and entertainments bringing out the crowds.

The elderly woman who was found dead in a house in The Link, Risinghurst last week died of natural causes. The man arrested on suspicion of murder has been released without charge.

There was a widely re-tweeted report about a woman in Muslim dress being spat at in Headington the week before last. I checked with the original poster @TellMamaUK and the source was a text message. They couldn’t give and I haven’t seen any further confirmation of the source or the story.

Fire and Rescure services were called to a chemical incident at Ivy Lane flats. A cleaner tried to unblock a sink with a chemical cleaner not knowing a resident had tried the same thing but with a different chemical the previous evening. The mixture gave off chlorine into the kitchen and the cleaner had to go to hospital. He was not seriously harmed.

A man was arrested after a teenage girl reported being raped in Headington on Tuesday evening the week before last (21 May). Police are appealing for witnesses or any other information.

@CafeNoirOxford‘s main course menu is now mainly pizza, although they still have a specials board.

@TheOxfordMail carried a nice memoir from the time Cotuit Hall was a children’s home.

Thornhill park-&-ride is getting a coffee stall in the waiting room.

Jack Straw’s Lane is fully open again after being re-surfaced as a cycle-friendly road. Despite the misleading – well, let’s be honest, wrong – headline in The Oxford Mail the road is still open to motor vehicles but the hope is that cars will drive more slowly and cyclists will feel safer. 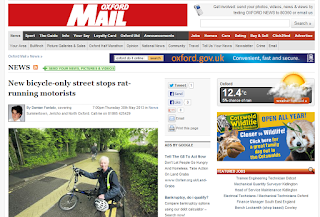