‘Festival’ probably isn’t the best word to describe the chocolate event happening in Broad Street this weekend. Any signs of celebration were at best muted when I visited this afternoon around 3 o’clock. In fact from the Parks Road end it was hard to see any sign of anything happening. By the time I got as far as Turl Street, though, I could see there was something going on. 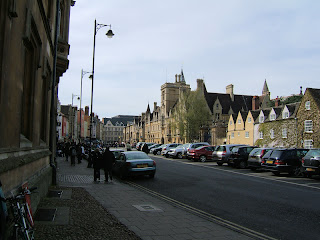 Is there a festival here?

I counted 12 stalls on the two sides of the road at the Cornmarket end of the street, but only about half were displaying and selling chocolate. Others were selling hot Mexican food, Spanish churros, Italian breads, various cakes, even hessian shopping bags. One stall had a display illustrating the production process from cocoa bean to finished chocolate.

On the stalls of the chocolatiers there were some attractive products on display though samples were not easy to come by, and where they were on offer tended to be small fragments rather than, say, a whole chocolate. Not that I expected to gorge myself, but one or two would have been nice! 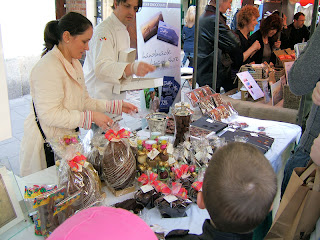 As you’d expect at the top end of the market, prices were high. I was most tempted by a fashionably modern presentation box of a dozen chocolates, just plain ingots in various shades of brown, but at over £12 for the box I couldn’t bring myself to part with the cash. On this and other stalls smaller packs priced around £5 – £7 seemed to be selling more readily. 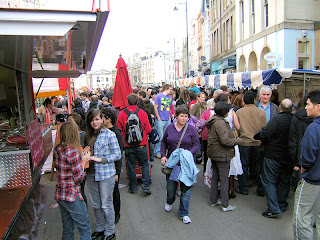 The photographs show that a fair number of people were looking round. The variety of languages I overheard implied many of them were tourists. I suspect that they were intrigued to happen upon the event but it probably wasn’t the highlight of their Oxford day. My recommendation: if the weather’s dry and warm tomorrow and you’re happy to get down to Broad Street, why not have a quick look at what’s on offer. You probably won’t stay long but you might just be tempted to buy some Mother’s Day chocolates, or an early Easter egg, or even a spicy quesadillo and a hessian bag to take it home in.

Christmas and chocolates. What better partners? If you’re shopping for your very own pick ‘n’ mix selection of high-class chocolates then this quick guide to the specialist chocshops around town is for you. Well, er, actually I bought some nice chocs from Coco Noir in Headington and wondered if I could have got something similar but cheaper somewhere else. Here’s what I found.

Thorntons in Cornmarket and Westgate sells packs of 8 chocolates with a declared minimum weight of 64g for £4.50. Assuming an average pack weight of 75g that works out at a price per 100g – £6.00. They don’t sell single chocolates either so again you’d have to buy a few packs if you want your own mixture.

Coco Noir in Headington on the London Road (N side) also sells individual chocolates by weight for you to make up your own selection. The cost is £4.20 per 100g. Their smallest box is about 125g, £5.25.

All these shops sell bigger selection packs and other chocolate products too, but as far as I could see only Chocology and Coco Noir offer the full pick-your-own choice. Of the two, Chocology wins on price but their advantage over Coco Noir probably wouldn’t be enough to make you head for the City from Headington. Quality and choice is a matter for your own personal taste. If you’re shopping for larger amounts Hotel Chocolat might be worth considering as long as you want at least six of each sort you buy – at approximately £3.66 per 100g for three or more packs they are the lowest-priced of the four.