For the full results of the election in both Oxford constituencies, see here.

Parking problems at the JR made the local news programmes this week, with calls for extending the amount of parking being countered by arguments that increased parking spaces only means more congestion on the roads. One proposal is for a dedicated hospital park-and-ride off Marsh Lane, which incidentally happens to be green belt land.

A classic Mini Metro was stolen from Mark Road, Headington and later found burnt out. The news spread, and the teenage owner has been offerred a free replacement by a fellow enthusiast in Scotland.

There’s a presentation this evening (Monday 11 May) about the first phase of the @BartonPark_ development. It’s from 6 – 7pm in the Long Room at the Town Hall, and it’s open to the public. I blogged about some of the issues I think need to be sorted out before the development gets underway.

Oxybox in Marston went out of business.

The launderette in Girdlestone Road made it into a Polling Day twitter theme of unusual polling stations, triggering a wave of jokes on the lines of ‘washing dirty laundry in public’, ‘all come out in the wash’, ‘the spin room’, [add your own joke here].

For the record, here are the results for the two Oxford constituencies in the May 2015 general election.

For a party which claims to be running second to Labour in Oxford East, saying it is “one of our best chances in the UK”, you would think the Greens might try a bit harder with their campaign literature. Can you spot the differences in these two which have come through my door? Yes, apart from a very similar quote from two different sources and a marginal update on how popular their policies are, they’ve CHANGED ONE OF THE FONTS! I fear Natalie Bennett’s been wasting her time on those TV debates if this is the best her organisation can do. 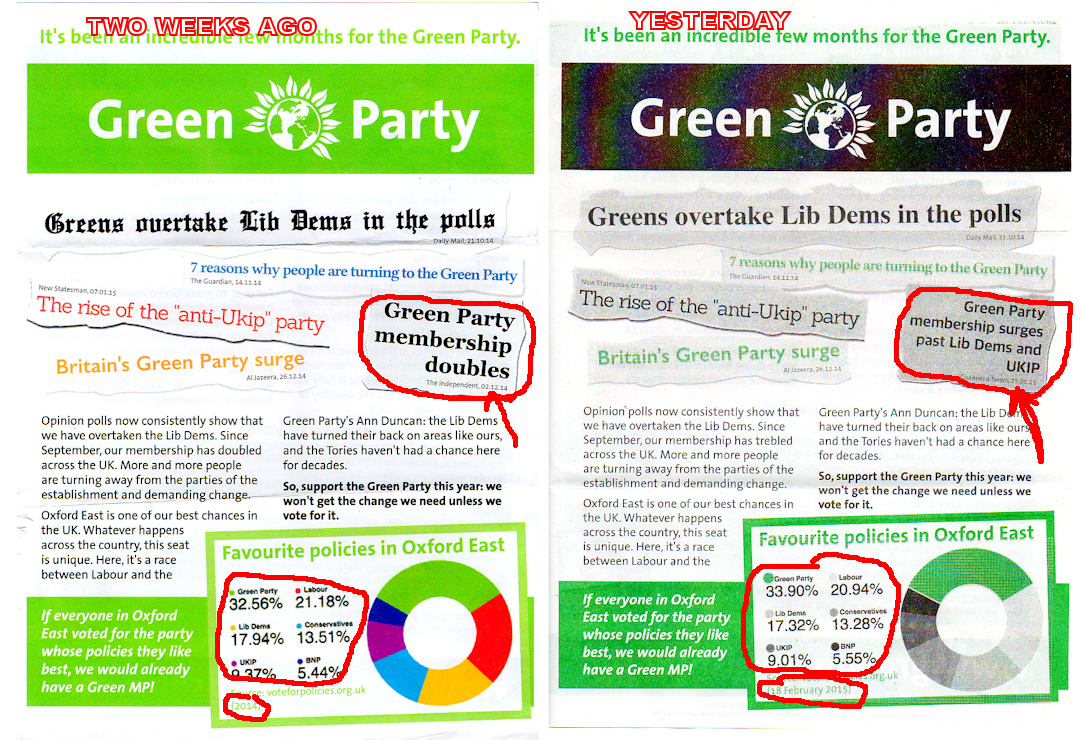