Don’t forget the London Road will be closed overnight between Headington and the Green Road roundabout for the next 4 nights. The closure is from 8pm to 6am. Buses will divert via Windmill Road, The Slade and out onto the Eastern Bypass back to the roundabout.

It turns out to be a rather crime-rich collection of headlines this week. Here goes — —

On Tuesday a man was found with stab wounds in a car parked in North Way, Barton. He was taken to hospital but died from his injuries, and police launched a murder investigation. A man was arrested on suspicion. Matters then get a little strange. Police mounted an operation in Kelburne Road, Cowley on Thursday and a second arrest was made. Another operation then took place in nearby Mayfair Road, and another man was arrested. Both men appeared separately in Oxford Magistrates Court on Saturday, where it emerged that Rafal Stawski of Mayfair Road had been charged with the Barton murder, and Marek Hndia of Fettiplace Road, Barton was charged with conspiracy to commit robbery against Stawski. Police are taking no further action against the original man arrested in connection with the murder. Both the accused men have been remanded to Oxford Crown Court on dates in May. Whether or not the two alleged crimes are related we probably won’t know until the crown Court hearings, if then, unless the police make any further statements.

Police have released an e-fit of a man they want to question in connection with an assault and robbery in Wood Farm on 4 April (see HH 208).

On Tuesday two men were convicted and jailed for six years and three months for an armed robbery at Stan James Bookmakers at the Roundway last April (see HH 155). The Oxford Mail report queries how the Lord Mayor of Oxford and two city councillors gave the men personal references.

And finally (whether or not it was in OX3) three men were arrested and a man was taken to hospital after an alleged incident of GBH in South Park on Tuesday.

The BBC’s Sunday Politics show last Sunday came from Old Headington parish hall. Was anyone from Headington there? 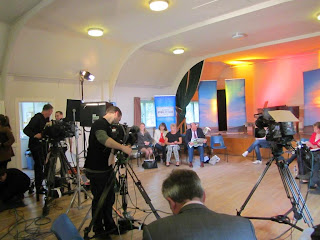 Setting up for the show. Photo: Penny Fox, via @headingtonnews

The Marston parking survey (see HH210) has been delivered to local residents.

The pub sign at @ButchersArmsOxf blew down in the high winds on Tuesday. 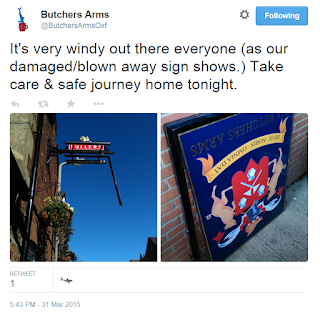 The owners of the Quarry Gate pub have got permission to demolish it (see HH 203).

The deadline for submitting suggestions for new street names for @BartonPark_ has passed, and it’s now up to the City Council to decide.

The Bury Knowle Park sensory garden has been planted. 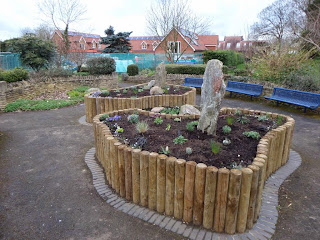 Night-time closures of the London Road for resurfacing have been announced. Between Monday 27 April and Friday 1 May the road will be closed between Stile Road and the Green Road roundabout. The same stretch will also be closed for two nights on 6 & 7 May.

A man was punched in the face and his phone was smashed in an assault and robbery at a bus stop in Wood Farm on Saturday.

Here’s my round-up of local news for the two weeks 22 December – 4 January.

A Happy New Year to all readers!

Has your Christmas tree dropped all its needles? Is it languishing outside looking brown and forlorn? Well, there are five places in this area where you can take it for recycling, where the nice people from @OxfordCity Council will shred it into tiny pieces to use as a mulch in the city parks and gardens.

Headington’s live advent calendar was declared a success, and organisers are already planning to repeat it in 2015.

The Quarry Morris dancers and mummers performed their traditional play and dances around the pubs of Quarry on Boxing Day. A good crowd turned out to watch despite the cold damp weather. @Howard_S took this video.

It’s the new year, and roadworks start again today on the London Road, the A40 at the Headington roundabout and (a new one) reconfiguration of The Plain to make it nice and safe for buses and cars, but not for cyclists. There are new timetables operating on bus routes 8 & 9 to allow for delays.

There was an armed robbery at Risinghurst Post Office at around 8pm last Tuesday (30th). Cash was taken but no-one was injured. @ThamesVP issued a description of two suspects and are appealing for witnesses and any information. Two men have been arrested in connection with the robbery and have been released on police bail.

The house at 14 Holyoake Road, previously known as Hillsboro House, where C S Lewis lived with Mrs Moore before moving to The Kilns, has been under threat of redevelopment for a while. However, a new planning application (ref 14/03474/FUL) shows the house being retained with two 5-bedroom houses being built in the space to the left of the existing house. Click the link on the planning reference to see details and to comment to the City Council. The Oxford Mail article is here.

The application by some Northway residents for part of the green space on Foxwell Drive to be declared a Town Green was rejected by the Planning Inspector after a two week hearing. Local campaigners are reported to be considering applying for a judicial review.

The Orders of St John Care Trust, who run the Townsend House residential care home on Bayswater Road, Barton invite everyone to a meeting on 5 February to discuss ways of integrating their residents more closely with the community around them. Cheese and wine are promised! More information on the e-democracy forum.

Headington and the OX3 area drew a blank in the New Year’s honours list, although several Oxford academics were honoured.

A planning application has been submitted for a change of use for the old Trade Exchange shop, from ‘retail’ to ‘retail and restaurant/café’.

Bury Knowle Club in Windmill Road (above two shops near the crossroads) is on the market for £300k freehold.

Speculation continued that @Oxford_Brookes might be planning close the Wheatley campus and move its business school and 2500 students to Headington. As yet the University has not made any statement.

Active posts on the Headington & Marston e-democracy forum over the last two weeks: