@HeadingtonNews has all the Christmas and New Year opening times for the Headington supermarkets, rubbish collection days and transport arrangements.

Another closure, but of limited interest. I see that the private road from Sandfield Road which goes into the JR by the bus stops and car park will be closed to people on foot and on bikes for 24 hours from 0600 on 1 Jan to 0600 on 2 Jan.

Police are appealing for information and witnesses after a 12 year old girl was injured in ‘a collision between a car and a pedestrian’. It happened on Marston Road at around 5.10pm on Saturday 15 December.

Local residents will be relieved to know that construction work at the JR Hospital for the extended A&E Department and Ronald McDonald House will be suspended over the Christmas holiday.

The Kennett Road dental practice is going to double in size.

A meeting to discuss the intended closure of the Marston & Northway police office was called off, leaving the situation in limbo. If nothing happens to change things it will close in May next year.

The Wood Farm/Slade controlled parking zone (CPZ) has been approved by the County Council and will come into force shortly.

For a final OX3 festive experience, listen to the children of St Andrew’s School singing ‘O Come All Ye Faithful’ and ‘The Song Of The Winter Wind’.

Wishing all readers a Merry Christmas however you celebrate it, and the hope of 2019 being a better year than the one now ending. Headington Headlines is taking a break, so the 400th edition will be out on 7 January.

A man in his 40s was ‘repeatedly stabbed‘ by ‘a gang of youths’ in Wood Farm Road just before midnight on Thursday evening. Four young people in their teens were arrested. In what is thought to be a related incident a police cordon was put in place for a time on Windmill Road.

Planners have decided that Oxford Brookes can keep its rain sculpture: https://t.co/DGX8ikZrKo

St Andrew’s Primary School Association @sasastandrews1 is holding a Christmas Craft Fair on Sunday 2 December from 11am to 2.30pm. 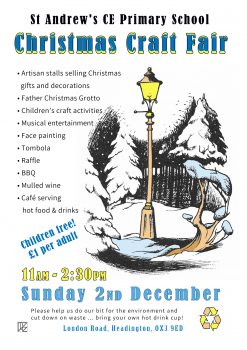 Oxford City played well and made some chances but lost their FA cup home replay against Tranmere Rovers 0 -2 on Tuesday evening.

The man who became infamous as the “Headington door knocker”, scamming residents with a hard luck story and asking for money, was given a 32 week jail sentence suspended for 18 months by Oxford magistrates.

@TheAmpleforth in Risinghurst celebrated its first year since re-opening as a community pub.

A group of residents has put forward a proposal for restricting through traffic in Headington Quarry. The group, known as Filter the Quarry, wants to make the narrow streets safer and cleaner. Their website sets out the proposed scheme and the thinking behind it.

@HeadingtonPlan reports that resurfacing work at the junction of Windmill Road and Old Road will be carried out overnight starting today (Monday 26th November) for about 1 week. Access to and from Old Road will be restricted; diversion routes include Girdlestone Road and Gipsy Lane.

Headington’s Christmas lights will be switched on at 5pm on Friday 30 November outside Barclays Bank. There will be lights on five trees, a choir, mince pies, wine and the Lord Mayor – what could be finer? 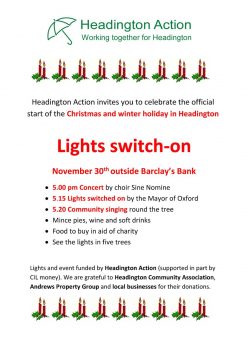 Once again there were no active posts on the Headington & Marston e-democracy forum this week.

Your weekly round-up of local news for 1 – 7 October .

In an incident that will play into the hands of the anti-Barton Park campaigners in Northway, a 13 year old boy was injured three weeks ago when he was hit by a car at the new light-controlled crossing on the A40. The car driver didn’t stop and the police are belatedly asking for witnesses or information.

A new Couch to 5k programme started on Thursday at Bury Knowle Park. It’s probably not too late to join in; this well-established programme is designed to get you fit with a gentle progression up to running 5 kilometres.

I went to see A2Dominion’s pre-application exhibition of their plans to redevelop the Ivy Lane flats at the JR and to build some new accommodation on Churchill Drive. My brief report is here.

A small scheme (planning ref: 18/01964/FUL) to widen the access to Headington School from Headley Way was approved this week. The wider opening will mean vehicles can drive in from Headley Way without having to wait on the road if another vehicle is trying to get out. The drawing below, submitted as part of the planning application, seems to show that the changed layout won’t interfere with the new cycle track to be built as part of Access to Headington.

The papers have been published for the Planning Review Committee meeting on Monday 15 October to review the refusal of planning permission for the Swan School. The recommendation is to overturn the earlier decision and grant permission.