In a letter published on Streetlife, Tesco confirm they will not be building a store on the site of the old Friar pub in Marston. They say they will be “working with the local planning authority and key stakeholders to find alternative uses” for the site.

There’s a suggestion emerging from the Neighbourhood Plan process @HeadingtonPlan that Headington might benefit from having a Parish Council. For a full account of the workings of Parish Councils see this guest blog about Old Marston PC by @theabingdontaxi from June last year.

There’s a consistent story of problems with internet connections and speeds in the New Headington area. The e-democracy forum has a thread running, and people are suspicious that the problems might be linked to the London Road roadworks.

Parts of Marston suffered a power cut on Wednesday, apparently caused by a kite (on a string, not a red bird) shorting out the power lines.

The City Council has imposed a Public Space Protection Order (PSPO) at Foresters Tower in Wood Farm. The Order prohibits “persons under 21 from entering or remaining in the tower unless they have a legitimate reason for visiting a resident”. It is a criminal offence to breach the order and it can be enforced by the police and delegated council officers.

The Minutes of the Neighbourhood Plan Forum on 10 february are now on the @HeadingtonPlan website.

Barton is “too clean for OxClean”, apparently. A walk-about by OxClean organisers, local councillors and community workers found so little litter they decided it won’t be worth sending in the OxClean volunteers over the Spring Clean weekend (6 – 8 March). Instead the Barton Community group will combine a clean-up with other activities later in the month.

Live music came to @ButchersArmsOxf for the first time when local band @EyeConUK played a gig on Saturday night.

In other pub news the Britannia Inn’s twitter account is now @Britannia_Inn. Their old one, @thebritoxford, is being phased out.

Here’s my weekly round-up of local news for 26 January – 1 February.

Traffic woes on the westbound approach to the Headington roundabout were exacerbated on Monday when a manhole collapsed and a lane had to be closed.

The Headington Tesco is not one of the 43 stores the company announced it will be closing (list at bottom of linked page).

Derelict property owner Martin Young, owner of 29 Old High Street, also owns a property on the Cowley Road which the City Council is considering for compulsory purchase because of its dilapidated condition. The house has been empty for over twenty years.

Last year the County Council decided to expand Windmill Primary School @WindmillOxford. Building work to cope with the expansion has still not started and the frustration felt by the Head and others involved with the school broke into the public arena this week.

A large pine tree in Bury Knowle Park was badly damaged by the winds overnight on Wednesday/Thursday. Picture c/o @GeoffMPowell. 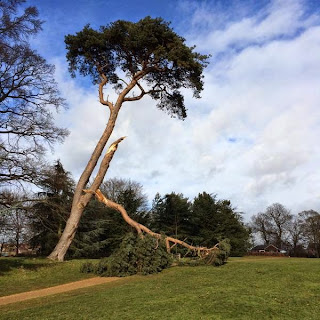 Two people were arrested at an address in Bassett Road, Barton on Wednesday. They are suspected of handling stolen goods and possession of class A drugs.

On Tuesday Frontier Estates exhibited their revised proposals for student accommodation on the corner of Latimer Road and London Road.

The resumption of roadworks on both sides of the Headington roundabout led predictably to big traffic delays. They are likely to continue until May/June.

Then there were two stories about parking associated with the road works. In Windmill Road, single yellow lines appeared without warning across several residents’ parking places. People were understandably upset, especially as they had paid for permits. It turned out it was all a mistake and the suspensions have been, er, suspended, though they might be reinstated sometime in the future if Windmill Road becomes a diversion route while the London Road works continue. I hope that’s clear.

The second story broke in the Streetlife forum that operates in the Marston/Northway area. Again, parking restrictions appeared apparently without warning. Investigation by @theabingdontaxi found that the statutory notice fixed to the lamposts explains that this is a temporary measure and not enforceable without accompanying signage and that it’s for the duration of the London Road improvement works. I imagine this is again a restriction that will be invoked if the need arises.

And it looks like still more roadworks, this time for the benefit of pedestrians and cyclists in Headington centre. @TheOxfordMail reports that @OxfordshireCC will start work this month to eliminate the flooding problem on the corner of London Road and Old High Street (not Windmill Road as stated in the article). I seem to remember that engineers have diagnosed a collapsed sewer as the cause of the problem, although the fall of the road surface needs re-setting too. @RosalindRogers has been campaigning for this for a long time!

Tesco announced the closure of 43 unprofitable stores. We don’t know yet if Headington (@Tesco6880) will be one of them, nor whether Tesco will now scrap plans to open on the old Friar pub site in Marston.

The Holy Trinity Preservation group is holding a public meeting on 22 January at @TheMasonsArmsHQ to discuss the revised plans for extensions to the Church. All welcome.

As the general election campaign juggernaut begins to rumble into motion, I wrote a short summary of the candidates so far declared in the two Oxford constituencies, and made a handy twitter list for you to follow if you don’t want to miss a word, at least from those of them that are on twitter.

And finally….. a tree blew down in Valentia Road in the storms.