So now Dorset House is finally open in its new incarnation what do we think of it? Here are my thoughts.

Although it’s a modern modular construction with all the student rooms prefabricated and delivered to site ready to drop into position, I think it looks quite good. From the London Road the four stories don’t look overbearing and I like the way Berkeley have kept the trees to soften the appearance of the buildings. The stone facings in yellow brick, or honey-coloured if you prefer, continue the Oxford tradition although rejecting the redbrick of the previous building. Cost saving is evident though in the standard off-the-shelf landscaping features such as the pathway lighting posts. 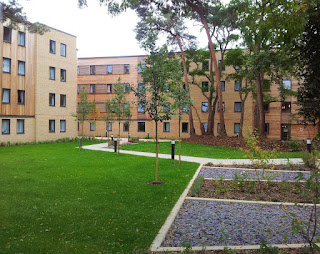 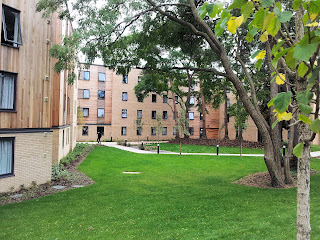 My main quibble is the use of wooden strip cladding on some of the facings. While I think this Scandinavian styling is well-suited to a woodland or forested setting it doesn’t work for me in a suburban city environment. The mix of vertical and horizontal strips is particularly messy: it might be justified if there were a need to distinguish buildings with different functions, but as far as I can see this isn’t the case here. It smacks of the cheap pastiche approach often seen in buildings from large-scale developers and I think the whole ensemble would look better if the brick facing had been used throughout. However, the wooden strips will weather (in fact they already seem to be changing colour) and the weathering will be different on different aspects so we must wait and see how the whole development looks in a few years time.

On balance I think it works reasonably well and I’ll look forward to seeing how it matures. 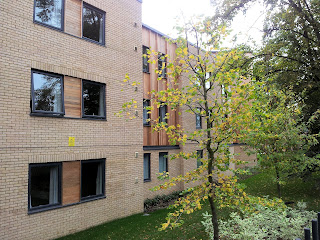 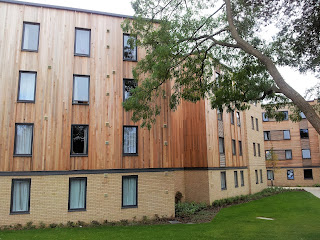