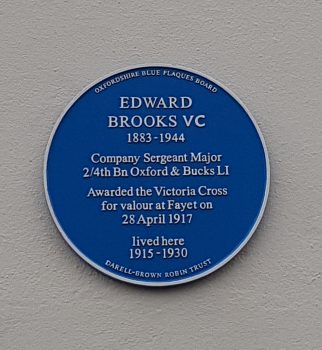 A blue plaque commemorating Edward Brooks VC was unveiled on Saturday 29 July 2017 at 16 Windsor Street in New Headington. Sgt-Major Brooks of the Ox and Bucks Light Infantry was awarded the VC in April 1917 for “most conspicuous bravery”. You can read his full story on the headington.org.uk website.

The ceremony was attended by about 80 people. Many family members were there together with civic dignitaries from Oxford and from his original home of Oakley in Buckinghamshire. His regiment (now part of  The Rifles) was also represented.

The Chairman of the Oxfordshire Blue Plaques Board, Prof Robert Evans, introduced the ceremony and Brigadier Nigel Mogg gave an account of Sgt-Major Brooks’ bravery. Buglers from the Regiment sounded the Last Post and Reveille. Brooks’ grandson Keith Brooks announced the ‘unveiling’ of the plaque, although no veil was in fact involved!

After the ceremony family and guests moved to the nearby Butcher’s Arms for refreshments.

(no audio)
For more reports of the event see the Edward Brooks page on Oxfordshire Blue Plaques Board and The Oxford Mail.