I realised I didn’t have a clue how the voting works in the European elections, so as part of my dedicated efforts to make life just a little bit easier for all my loyal readers I researched it and now bring you the fruits of my labours.

Here in Oxford we’re part of the South-east Region. Ten MEPs will be elected to represent us. But you will only have ONE vote – one X on the ballot paper – on 22 May. You vote for a party not an individual. Each of the main competing parties has produced a list of 10 candidates (smaller parties may have fewer): candidates are elected in turn starting at the top of the party’s list. The candidates’ names will be on the ballot paper but there will be no other information about them – do your research first! Individuals can stand too, and the voting system treats them as if they were a party with only one candidate on the list.

Here is the official record of who is standing. The UKPollingReport website has a complete and also more colourful version giving some information about some of the candidates.

This is a mock-up of what the ballot paper will look like, courtesy of Southampton Council’s Returning Officer. 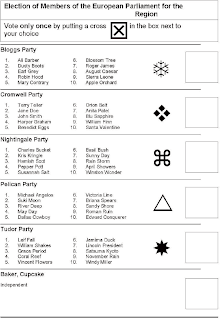 So how does your one vote get transformed into 10 elected MEPs? Here’s how.

This table shows a simulated example.

We start with the parties sorted by the number of votes they received. Party A has the most votes so their first candidate is elected, indicated by the red block. In the next column Party A’s votes are scaled by dividing by 2, meaning they now have 11728 counting votes. Party B now have the highest number, so their first candidate is elected (red block), and their votes are scaled down to 9333. Third place goes to Party C, fourth to Party D.

By the time we get to the fifth place, Party A’s scaled votes are again the highest number, so Party A’s second candidate is elected. Their original vote is now scaled by 3, becoming 7819. And so on, with following places going to Party B, Party A again, Party C, Party E (for the first time), and finally Party D.

So that’s it. Simple really, isn’t it?