Even though I heard a fair amount of classical music as a child it hasn’t been a major part of my life since then, so I don’t feel qualified to write a review of the concert I went to yesterday evening. I shall call this an ‘appreciation’ instead.

The Queen’s College choir is rated as one of the best in Oxford so a full-scale performance in the College chapel easily got me out in the cold to walk down into the City. With chairs set out on the chapel floor and in the ante-chapel I estimate the audience must have been about 300. Congestion and late arrivals delayed the start of the performance by some 15 minutes to around 7.45. The twenty-eight strong choir was accompanied by the Queen’s Consort (leader Caroline Balding) – strings, oboes (2), trumpets(2), timpani, and harpsichord/organ. Choir and Consort were all under the direction of Owen Rees.

The short instrumental Sinfony opening the performance got off to a slightly shaky start but after a few minutes it all came together and from then on everything went well. Tenor William Blake opened as the first soloist and led confidently into the entry of the full chorus with And The Glory of the Lord.

Owen Rees used the opportunity to give as many choir members as possible a chance to perform a solo, so a succession of voices alternated with the full choir. Their enthusiasm was obvious, with the choir and their musical scores bobbing in time with the music. Discreetly bobbing, of course. Although inevitably some soloists managed better than others the standard was extremely high and I think it would be unfair of me (what do I know about choral music? Very little.) to single out any for special praise or criticism. I would rate them all from Very Good to Excellent.

Whenever I go to a live performance I hope there’ll be a point where the performance itself takes over and I stop being aware of being a spectator. This happened towards the end of the first part during Flora Allen and Sheena Wong’s duet of He Shall Feed His Flock, not one of the Messiah’s blockbusters but one of the highlights for me.

A fifteen minute interval followed His Yoke is Easy (Chorus). They work you hard at Queen’s, it seems: the choir filed out through the audience to loud applause; most of the audience then headed for the Hall for wine or soft drinks where we found the choir members drafted in to serve the drinks and take the cash!

The second half began bizarrely. There seemed to be a few thumps and bangs during the choir’s opening chorus. Then Tara Mansfield’s gentle solo He was Despised was accompanied by the flashes and bangs of a firework performance somewhere close by (I suspect Magdalen!*). Mansfield carried on unfazed while the choir and audience allowed themselves a few smiles. Am I wrong to suspect that Owen Rees indicated the choir should turn up the volume for Surely He Hath Borne Our Griefs that followed? Result: Choir 2: Fireworks 1.

The performance continued, thankfully firework-free by now, to climax with the Hallelujah Chorus with the audience standing and demurely tapping its collective feet. No-one seemed inclined to sing along. Then a five minute breather before the short third part ended with the full Consort and Choir’s Amen.

It was a really enjoyable evening. The acoustics in Queen’s chapel are excellent for performances like this, and the choir lived up to the reputation it has earned over the past years under the tutelage of Rees. My ancient mobile phone could only manage a grainy picture in the low light, but for what it’s worth here is the scene. 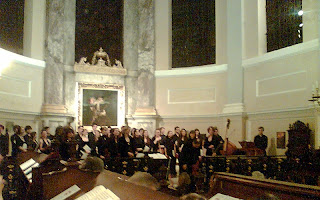 One thought on “Handel’s Messiah at The Queen’s College”