Here’s my weekly round-up of local news for 15 -21 December.

The Skipton Building Society opened on Monday morning in the shop that used to be Ripples. They had a sherry-and-mince-pies open day on Friday.

The Headington Live Advent Calendar continued with performances around the main central area.

Professional camera equipment and a handbag were stolen in a burglary in John Snow Place on Sunday last week (14 December).

The traffic-calming planters in Lime Walk have been tinsel bombed.

Housebuilders Hill have been chosen to build the first tranche of new housing in Barton Park. More on this and the company in this article.

This original tweet and picture, and the reply, made me laugh.

@jonny_ives @TonyOX3 Yup, closer to the wall would have left room for another car 😉 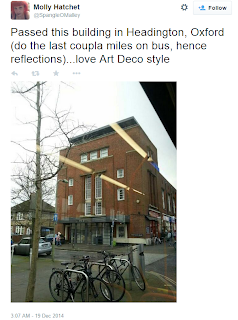 And finally – a very Merry Christmas to all readers of this blog! And if you don’t celebrate Christmas, have a good time anyway, whatever you’re doing.