A new shuttle bus service linking the University of Oxford’s science area with Harwell Science and Innovation Campus and the Old Road Campus began operating on Monday. The ‘Science Transit Shuttle’ provides a weekday minibus connection every 30 minutes between 7am and 7pm. Starting in the science area at South Parks Road, journey times are expected to be around 15-25 minutes to Old Road Campus and 50-60 minutes to Harwell. The service is currently restricted to University members and Harwell staff, but may be made available to the public at some future time.

Oxford East MP @AndrewSmithMP voted against renewing Trident in the House of Commons on Monday night.

The Royal Standard pub, owned by Greene King, has ‘updated’ its pub sign. It seems to be one of many old signs the company is replacing. (Thanks to @headingtonnews for the link.) 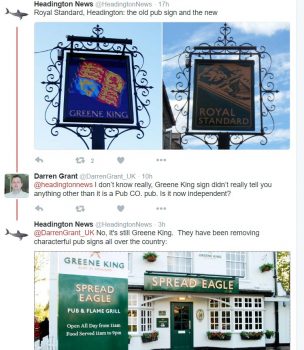 More on the proposed regeneration plans for Barton, though reading more closely it’s still not clear what if anything will happen.

Two loud bangs were heard in the Rock Edge/Old Road area on Saturday. Were they fireworks? Councillor @RuthWilk says there have been similar reports in the past, also at this time of year.

Another beautiful day in Headington. We’re open from 4.30pm for after work and evening relaxations. 🙂☀️ pic.twitter.com/P1tN1YMkNu