The planning application for the Stansfeld site is now on the Council’s website (ref: 16/02618/FUL). Comments are open until Saturday 19 November.

Headington has one less charity shop. The CLIC Sargent shop next to HSBC has closed and the premises are up for lease.

@TheAmpRevival are having an open Community Meeting this coming Friday 4 November at 6.30pm in the Risinghurst Community Centre where they are re-launching their share offer. Also don’t forget @TiagosFishChips fish ‘n’ chips van is outside The Amp weekly every Tuesday from 5 – 9pm. 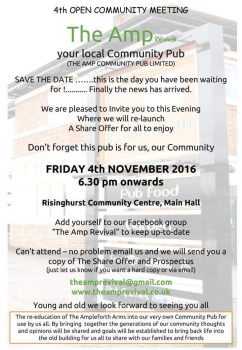 The British Legion, whose members used to stand at the entrance to the JR on Headley Way to pay their respects to soldiers being repatriated after dying in Afghanistan, planted 456 daffodils at the corner on Friday. That’s one for each fatality in that campaign. The corner is informally known as the “Final Turn”.

456 daffodils planted at Oxford’s John Radcliffe in memory of the men & women who lost their lives in Afghanistan 🌼 #wewillrememberthem pic.twitter.com/itvcw3Kv0z

Oxford University have agreed to set aside their plan to divert the Science Transit Shuttle buses via Lime Walk and Stapleton Road. However, they say they will keep their options open in case Warneford Road/Old Road congestion gets worse.

I posted an article giving more details of a planning application to build a mix of apartments, parking spaces and a new access road on land next to the C S Lewis nature reserve in Risinghurst which has attracted local opposition. See the application and comments on the Council’s website (ref: 16/02549/FUL). The comments are mostly, but not exclusively, against the development. There is also a petition asking the Council to reject the application. The application is open for comments until Monday 14 November.