Let’s be honest; this hasn’t started well. Since the coloured paint appeared in the affected streets back in June and word got out that it was to do with a heat pipe linking the two hopsitals the Trust has been stubbornly mute. Requests for more information by Councillors and local residents, particuarly Highfield Residents Association, have been turned down by  the Trust on the grounds that “we’re still in legal discussions”. This position continued as visible construction work started in the JR grounds and interest – and concern – grew. As well as my reports the story was picked up by the local press and radio, and on the local e-democracy forum.

The information released on Monday gave points of contact for any questions: 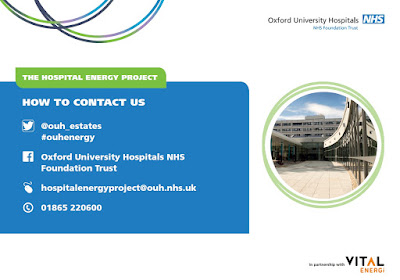 There is also a website which reproduces some of the slides from the press briefing.

Since then the twitter account has been silent. The correct facebook name is actually OUHospitals and there doesn’t seem to be anything about the project there (I may be wrong as I don’t do facebook and I’m not familiar with its layout). Enquiries to the email address get a standard response promising a reply by Monday 7 December, and the telephone number is the Trust’s Estates Department general enquiries who know nothing about the project.

It’s hard to be polite about this. The Trust’s handling of external communications on this project can at best be described as inept. It is certainly counter-productive. It only fuels the uncertainty and genuine anxieties felt by residents and others who will be affected. I can only plead with the Trust to get this under control before they lose all hope of keeping local opinion on side.

The latest news is that a public meeting is being arranged by local councillors and Highfield Residents Association on Wednesday 9 December at 7pm. The venue is to be confirmed but is expected to be All Saint’s Church House in New High Street. The organisers are hoping that the Trust will be there and be able to make a start listening to people and answering their questions.