While I was in the Ashmolean for coffee this morning I saw that their current exhibition “Lucien Pissarro in England: The Eragny Press 1895 – 1914” is free, so ever the opportunist I took the chance of a quick look round. It’s only a small exhibition – one gallery – and is preceded by an even smaller display of some fine drawings and illustrations by English artists of the same period including Ruskin and Augustus John.

Lucien, son of Camille Pissarro (Impressionist, Pointillist, post-Impressionist), moved permanently to London from France in 1890. He married Esther Bensusan and together they set up the Eragny Press, named after the Pissarro family’s home village in Normandy. They tried hard to make a living illustrating and printing limited edition hand-made books. They produced 32 titles and this exhibition is the first time all 32 have been displayed together. 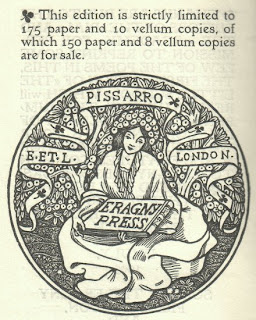 Illustration from “The Little School;
A Posy of Rhymes” by T. Sturge Moore, 1905
(Elston Press)

The books themselves are works of art. The influence of the Pre-Raphaelites and the Arts and Crafts movement is clear to see in Pissarro’s illustrations – and vice versa, as he became a notable figure in the English arts scene of the time.

I’m sure the exhibition will charm and delight people who are knowledgeable about the art of the period, and specialists in the fields of illustration, woodblock engraving and bookbinding. A less well-informed amateur like me will, I think, be pleased to have spent a half hour or so looking at some beautifully crafted objects.