@OxfordshireCC surprised us with an announcement of £12.5m to be spent on a project called “Access to Headington”, covering Headley Way, Old Road, The Slade and Horspath Driftway. A consultation has started – more information here. Do go and see the proposals if you can: the County has opened a formal consultation which expires on 7 August. The display board images are on the consultation website. People who cycle will welcome the changes (with some modifications) but I suspect the most controversial aspects of the plans will be the loss of some grass verges, trees and on-road parking spaces.

Six people turned out for @QuarryVelo‘s inaugural Sunday Social ride, an easy-paced 25 miles round Otmoor ending with a jaunt through the City centre.

There was a small car fire in Atkyns Road, Wood Farm in the early hours of Tuesday morning. Police are investigating it as a possible case of arson.

Remember the story from April of a man in a car in Barton dying after being stabbed, and the subsequent arrests in Cowley on other charges? Now as part of the same investigations another man, Radoslaw Litwiak, has been charged with conspiracy to kidnap and rob.

Work has started to replace the street lights in Staunton Road but progress seems rather slow. Sandfield Road is next.

On Monday, work started on the site of the new access junction for @BartonPark_ with lane restrictions on the Headington-bound side of the Northern Bypass (A40). On Wednesday there was an official groundbreaking ceremony to mark the start of the development proper.

If you missed the presentation of the developers’ latest plans for Phase 1 last Monday and Saturday, there’s a final chance on Tuesday from 4 – 7 pm at the Northway Community Centre in Dora Carr Close. When they submit their formal planning application there will be the usual opportuntiy to comment via the City Council. They have distributed a flyer with some general information about the development.

The Headington Shark featured on Channel 4 on Monday, in a programme called “Damned Designs – Don’t Demolish My Home.

Oxforshire County Council announced it intends to cut £2.3m from the bus services it supports. The Dial-a-Ride service is to go, but the other services to be affected have not yet been announced. The occasional H1 and H2 services which connect Headington shops with Old Marston, Sandhills and Quarry are possible targets, and the 280 service to Aylesbury might also be a victim. For anyone unfamiliar with the H1 and H2 routes, this is when they run.

Starting on Bank Holiday Monday (25 May), @CreationTheatre are running “Put On A Play In A Week” drama workshops for 6 – 8 and 9 – 12 year-olds in Headington Baptist Church.

The much anticipated closure of Headington Post Office in its present home and a move to the Co-op has been confirmed, with the Post Office opening a consultation on the proposal. Within the consultation it says the new Office will be fully open all day Saturday and offer “selected services” late and on Sundays.

The male nurse who raped and assaulted 27 female patients at the JR Hospital was sentenced to 18 years.

There was a significant power cut on Thursday affecting around 700 – 900 homes, shops and offices in the central area. There were also reports of a smell of burning. SSE said the fault “was at a link box and that fed back up the line to a substation. That caused the substation to overheat and produce smoke but it’s not a fire.” Some premises didn’t have power restored until the evening. Another cut affecting about 20 homes in Headington happened on Saturday.

@HeadingtonPlan has published a series of ‘character assessments’ of different areas of Headington. An interesting collection of thumbnail sketches.

Some people in Marston are hoping they can rescue the closed Jack Russell pub and run it as a community pub.

Remember the @ButchersArmsOxf sign blowing down in the storm? They’ve got a smart new one now. 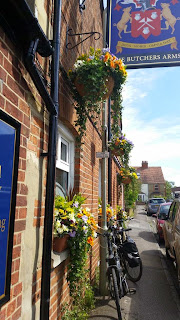