File under “Oh no, not more roadworks!” A collapsed sewer in Green Road means the road will be closed for about three weeks while Thames Water carry out the necessary repairs.

Oxford Bus Company’s ‘Pick-me-Up’ service starts on Monday 25 June. It will operate within the area shown on the map below. Within the zone a minibus picks you up more-or-less anywhere and takes you to within a short walk of your chosen destination for a fixed fare of £2.50. You’ll need the app on your smartphone. Full details here pickmeup.oxfordbus.co.uk/.

The collapse of South Oxfordshire’s local plan means the choice of housing sites in the district has gone back to square one. Land at Wick Farm and on the Christ Church College land next to Barton Park, both of which had been rejected in the original proposals, is now back on the agenda. Watch this space for updates.

Oxford Civic Society added its voice to the chorus of objections to the siting of the proposed Swan School at the Harlow Centre in Marston. “A quart into a pint pot”; “based on expediency”; “the site is far too small”; traffic managemnt measures, especially for cycles, are “implausible”.

So far I’ve had two leaflets through my letterbox promoting LibDem Stefanie (‘Stef’) Garden @SGarden13 as Ruth Wilkinson’s replacement. Nothing yet from declared Conservative and Labour candidates, and I don’t know if the Green’s will be fielding anyone. The poll is on Thursday 19 July.

The Costa Coffee drive-thru [sic] at the Horspath Driftway trading estate (where Aldi is) officially opens today, although informed sources say it’s been open for quite a few days.

Turn off your idling engine, say the pupils of Windmill Primary. pic.twitter.com/URvPvCR8Jv

Once again there were no new posts on the Headington & Marston e-democracy forum this week:

Your weekly round-up of local news for 27 March – 2 April.

Last week I was premature in announcing the end of the heatpipe works in Headington’s residential streets, but now it is indeed true. Not that all the work is complete – parts of Churchill Drive will be closed until the end of May, and the work to link the heatpipe across the London Road starts today (3 April) and continues until 28 April. Details of what the London Road work involves are here.

Staying with roadworks, here’s the latest from the County on the Access to Headington work on The Slade. It’s due to start in a week’s time, on 10 April.

The by-election in Barton & Sandhills following the death of Van Coulter will be on 4 May, the same day as the County elections & @HeadingtonPlan referendum. Labour have announced their candidate, Mark Ladbrooke. Here he is in the Oxford Mail in 2013 as an NHS union ‘strong man‘, and in February this year as Secretary of a group opposing the changes in the NHS. Nominations close tomorrow (Tuesday) and I’ll give a full list when I have it.

Some people will have three ballot papers that day. Everyone gets to vote in the County Council elections; Barton & Sandhills will vote for a new city councillor; and everyone living in the Headington Plan area will be able to vote in the Plan’s referendum. I understand the referendum will offer a simple ‘YES/NO’ answer to the question “Do you want Oxford City Council to use the Neighbourhood Plan for Headington to help it decide planning applications in the neighbourhood area?”. The results of the referendum and the by-election are expected overnight on 4 – 5 May. Poll cards have already been issued. 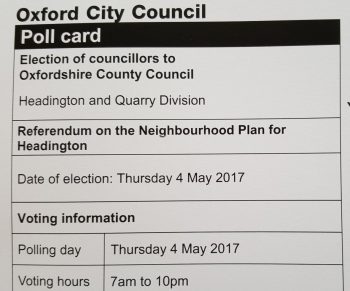 This week’s scheduled meeting of the East Area Planning Committee has been cancelled due to ‘lack of business to discuss’. Which means there’s still no decision on the Wychwood Lane development application on the boundary of the C S Lewis Nature Reserve in Risinghurst.

An unexpected story broke with speculation that OUH Hospitals might be offered land at Wick Farm to build staff accommodation, car parking and care facilities. The land is in South Oxfordshire DC and I don’t know whether it is earmarked for development in the new Local Plan they are working on, so for the time being I think any claims should be treated with caution.

More gratuitous vandalism this week. All the windows of the library bus at St Nicholas Primary School in Marston were smashed overnight on Monday, and the school’s CCTV cameras ripped out.

The Garden flower shop turned yellow in support of @OUFCOfficial‘s appearance in the final of the Checkatrade Trophy against Coventry at Wembley on Sunday. Sadly, the match ended 2-1 to Coventry.

Another takeaway food shop in Headington? Planning application 17/00639/FUL is for a change of use of what used to be Connell’s Estate Agents (before they moved up the road) opposite Skipton Building Society from “Estate Agent (Use Class A2) to Hot Food Takeaway (Use Class A5)”. The applicant, Mr Selahattin Kaya, used to run a restaurant company called KARAZAN Ltd which was voluntarily dissolved in 2011. The consultation on the application closes on 27 April.

While we’re on the subject of food outlets, Dragon Express, who are taking over the old Rose Tree Restaurant, have applied to remove the outdoor seating and reinstate the area as ‘public highway’. I can’t remember ever seeing anyone sitting out there anyway, but perhaps I was never there at the right time.

Here’s a rare look inside our Headington New reservoir whilst it’s drained for inspection. pic.twitter.com/xJ2NZJheaE

The reservoir is at the top of Headington Hill, behind the one that’s visible from the road.