The new Westgate shopping centre, the latest jewel in Oxford’s crown, opened to the public on Tuesday 24 October. There were Important People, razzamatazz, and crowds of citizens curious to explore this new quarter of the city. But beneath the glitz and glamour something was amiss. This is the story of The Missing Cycle Parking Spaces.

Why does it matter?

It matters because Oxford’s roads are choked with traffic. St Aldates and the High are often literally full of buses. Emergency vehicles have a hard time getting through. Air pollution is well over legal limits. The County and City Councils trumpet their policies of encouraging people to switch their journey habits from motor vehicles to public transport and cycles. Time and again we are told Oxford is a ‘cycle city’. This is true only in so far as determined people choose to get around by bike because it’s quicker, cheaper and healthier than other options; but they do this despite the grossly inadequate infrastructure and the clear objective dangers.

Time and time again the reality is that cyclists are marginalised and ignored. To provide safe attractive cycle routes means spending money on physical infrastructure, not just paint. But with the possible exception of the Access to Headington scheme, where we must wait and see the outcome, this hasn’t happened.

In granting planning permission for the Westgate development Oxford City placed a condition that required Westgate to provide about 1000 extra cycle parking spaces. Never mind that this is about half the number that would be considered adequate in Holland, Denmark or Germany, and only two-thirds of those required under the council’s own planning policies; it’s a step in the right direction. Meanwhile over 100 spaces were removed from the city centre to make way for construction. Cycle city? Not. It just reinforces the perception that despite the fine words and policies, making ordinary everyday journeys by bike is seen by our planners and transport engineers as a marginal activity which can be slotted in as an afterthought. No surprise that on opening day the 1000 space car park in Westgate was fully operational.

Fast forward to opening day. Westgate’s website boasts of the 1000 cycle parking spaces they have provided, and the ‘Cycle Hub’ – covered, secure bike parking with a workshop run by Oxford’s well-regarded Broken Spoke Cooperative. But wait – where are all these spaces? Where is the Hub? Mystified cyclists started to ask, and were airily waved away (I was a witness).  Here’s how it unfolded.

There is supposed to be masses of cycle parking all around the Westgate, but I couldn’t find it. People were locking bikes to street signs pic.twitter.com/pV1SXg2Dof

Hi there, there are around 1000 spaces available to securely store bikes in the vicinity of Westgate. More info here https://t.co/1JNVMz7TgC

But it’s not true

Oxford Today visits the new #WestgateOxford shopping centre as it opens – but fails to find all those new bike parking spaces pic.twitter.com/H74gDdR25k

The following day people started asking about the Cycle Hub.

Hi, the Cycle Hub is nearly ready & will open soon. It’s located on Old Greyfriars St, near the taxi rank. More details are on our website.

But it isn’t. That’s the problem. People need a map!!!

Loads of spaces, but empty as locked. No signage or directions to either. pic.twitter.com/U3mNGAYsnx

On Thursday the County tried to claim credit, but they were behind the times.

This is simply not true about cycling. Very few of the promised ~1000 extra spaces are in place. (cc @cycloxoxford)

The story had gone too public.

The Lord Mayor was standing right next to a senior Westgate person on Tuesday when said person repeated the ‘1000 spaces’ claim.

and Broken Spoke distanced itself from the Hub project

Just to confirm, we’re not part of the Cycle hub. There might have been an internal miscommunication between the folks organising the hub.

Cyclox audited what was actually in place. In summary:

Their full report is here, which also quotes the two planning conditions placed on the Westgate developers by the City’s planners.

On Friday the City installed some temporary bike parking, caught on camera when Green Cllr David Thomas was filming a piece for his facebook page.

Not surprisingly it was immediately full. 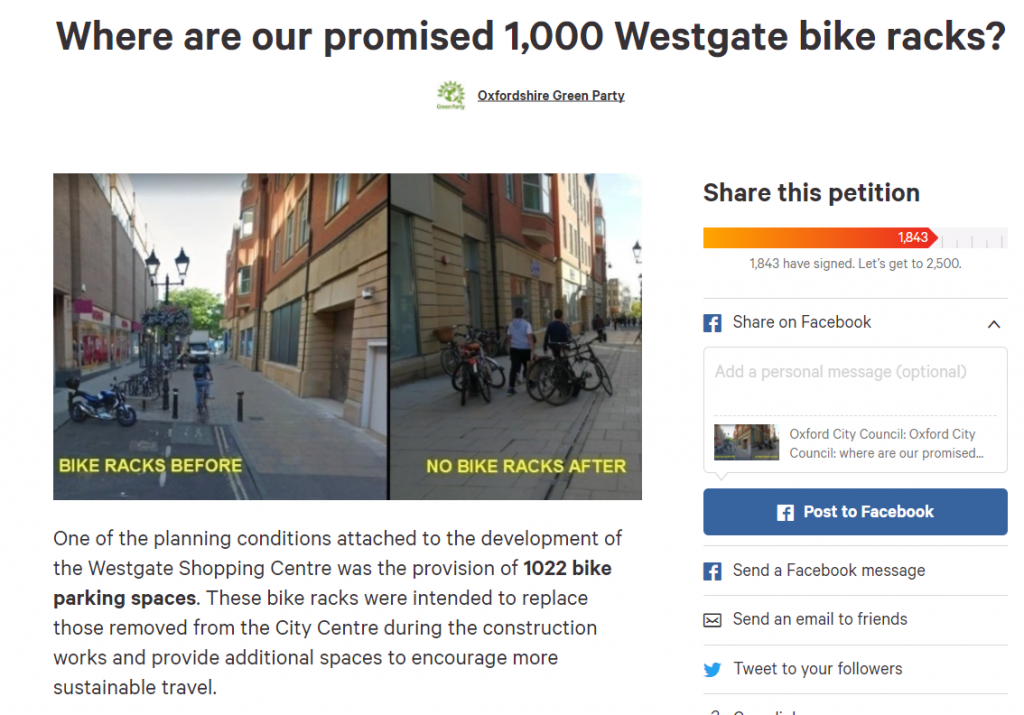 Please see below our comments regarding the cycle spaces at Westgate Oxford. pic.twitter.com/dF2dsrId3d

By the weekend the story had been picked up nationally

POLL. How long will it take @WestgateOxford to install the ~1000 permanent bike parking spaces required by their planning conditions?

After the weekend the City Council responded to the Green’s petition:

30 OCT 2017 — The Westgate Shopping Centre redevelopment has not yet been fully completed – workers are still on site and there are some shops still to be completed and a lot of work around the edges of the new development.

Oxford City Council, as the city’s planning authority, insisted on bicycle parking being included in the Westgate Shopping Centre redevelopment and we are pleased that new bike racks for 1,000 bicycles will be installed as part of the development.

The provision of the bike racks for 1,000 bicycles is a requirement of the planning permission for the new Westgate Shopping Centre. The development was created followed extensive public consultation with stakeholders, including cycling groups in Oxford such as Cyclox. This consultation included the location and type of bike racks that would be installed.

Sadly, although 180 cycle spaces have been installed, the installation of the majority of the new bike racks has been delayed. Last week the Westgate Shopping Centre developer apologised for this delay, and again reassured the City Council and the public that it will install all the bike racks and meet the planning requirement. On Friday, the City Council installed 50 temporary bike racks in St Ebbes Street.

We are disappointed that the cycle parking was not fully installed prior to the shopping centre being opened, and are working with the developers to ensure that it is installed and operational as soon as possible.

A week after opening the ‘1000 spaces’ claim has disappeared from Westgate’s website; it now says:

If you come to Westgate by bike, you’ll be able to park conveniently around the centre using our bicycle spaces in the vicinity of Westgate. Indoor secure parking stands as well as outdoor parking at Greyfriars Place at the northern end of Old Greyfriars Street is also available.

and the link to ‘Cycle Hub information’ gets an Error 404 Unavailable.

It’s speculation of course, but here’s my scenario for how things will play out over the next six months or so. Westgate will install some new bike stands, perhaps a couple of hundred scattered around the block. They will then say that they can’t install any more because there’s not enough safe space, the pavements are too narrow, the buses might hit them on the tight bends, etc etc  – all concerns expressed over the past four years by, among others, Cyclox and Oxford Civic Society.  They will apply for a variation to the planning condition which releases them from the obligation to provide the remaining stands; the council will try to get it nodded through under delegated powers; the Greens and LibDems will blow the whistle and get it put to the West Area Planning Committee where Labour will close ranks and back Westgate

And Oxford’s cyclists will once again have been marginalised.