Residents have moved in to Headington’s newest street, Blackburn Close. I went to have a look now all the builders’ fencing has gone and the landscaping and planting has finished.

The two blocks that form the Close have been built on the piece of ground between the Manor Hospital and the back of Horwood Close. They are in the style which looks set to become the norm for budget-price residential building in the twenty-teens – flat roofed blocks with mixed-material exteriors including timber cladding. The builder has opted for a rather dark brick and grey-finished steel to contrast with the timber. 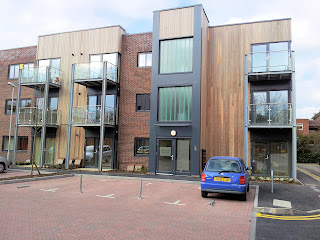 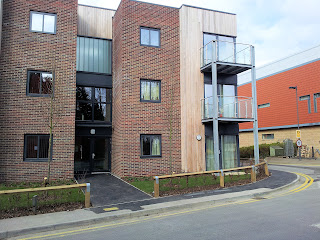 The overall effect is neat and tidy rather than immediately attractive, but if the quality of build is satisfactory there’s no obvious reason why these affordable units shouldn’t be a welcome addition to the local housing mix.

It’s a shame that ‘neat and tidy’ didn’t carry over to the street signage. Cheap and flimsy is the choice here. I wonder if the City’s funds can stretch to Oxford’s standard sturdy white-on-black version. 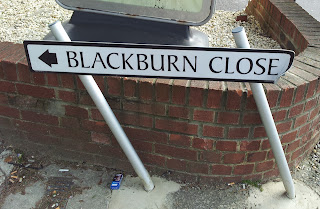 There’s a nice touch on the buildings themselves – bird boxes have been fixed to the wooden cladding, some singly, one in a cluster of three. There’s another, larger box with a slot rather than a round hole. No doubt a birder will know what it’s designed for (though I haven’t got a picture). Like the other boxes it’s set about 2m above the ground. I do wonder about the potential mess though! 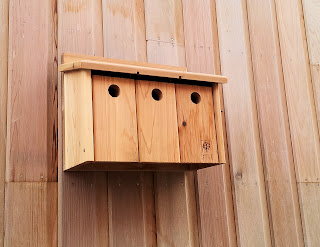 As always, headington.org.uk has all the background to the site and the origin of its name including the link to Barbara “Walkies” Woodhouse. Scroll down to, or search for, “Social housing on Manor Ground site”.