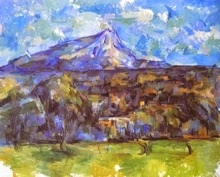 I went to the Ashmolean the other day to see their current exhibition “Cézanne and the Modern”. It’s quite a small affair spread over three galleries but hardly crowded with exhibits. Cézanne himself is well-represented with a series of watercolours showing his style evolving towards abstraction, and making use of a restrained blue-green palette. In oils, the Mont Sainte-Victoire used as the exhibition’s featured image stands out. It’s one of many paintings he did of this subject.

As far as I remember (I didn’t take notes) other big name artists are represented by only one work each – van Goch, Sisley, Toulouse-Lautrec, Dégas, Manet – and two (or three?) Modiglianis. Of these the Sisley appealed the most to me.

But the exhibition did introduce me to two artists I didn’t know before. Three bronzes by Jacques Lipchitz impressed: a bust of his wife (said, I think, to be in Impressionist style), a striking Cubist “Acrobat on on a Horse” (left), and a powerful Jason wrestling a bull.

The other was Chaim Soutine, variously said to be Russian, Lithuanian and French. He certainly ended up in France where he did most of his work. He is represented in the exhibition by some portraits in oils, but the abstract landscapes he painted after discovering the Pyrenees are astonishing. Their visceral energy reminded me of Francis Bacon, although his colours are brighter and wilder. I read afterwards that Soutine also painted raw meat. 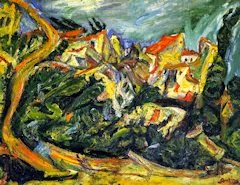 A Soutine landscape (not in exhibition)

The exhibition has one example of this – a painting of a (dead) hanging turkey. I wouldn’t want one of his landscapes in my home, but I’m pleased to have seen his work for the first time.

Oh, and I couldn’t resist illustrating my first reaction on seeing his self-portrait! 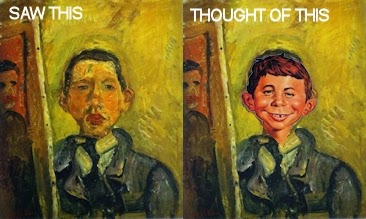