Headington’s bike hire scheme was relaunched under the management of a new company. They are still using the name Oxonbike and all the details are on their website (confusingly using the domain name in the plural – Oxonbikes). The deal seems to be the same as before and the locations are also the same, though the actual bike racks have a different design and technology. Their twitter account is @oxonbike. 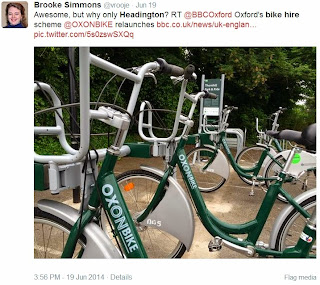 It seems the London Road road works have been put back to late Summer and will run through into 2015 with a break over Christmas.

The Stansfeld outdoor centre off Quarry Road has been registered as an Asset of Community Value.

Two aspiring politicians who stood in OX3 wards in the city elections in May are trying their luck again in the Cowley Ward by-election on 17 July. @KatHarborne (Con) stood for Quarry & Risinghurst and @DavidHenwood2 stood for Headington Ward.

And talking of elections, there’s an election to choose the 12 people who make up Old Marston Parish Council next Thursday, 26 June. @theabingdontaxi, who lives in the village, has written a guest blog about the role and powers of the Parish Council and asking for information about the candidates. Apparently it’s the first time in 16 years an election has been needed because there are more candidates than places to fill.

@Oxford_Brookes‘ John Henry Brookes Building by architects @DEArchitects, which I reported in May had won a RIBA regional award is one of six buildings in the “Campus” category to win a RIBA National award. The national award winners go forward for consideration in the Stirling Prize.

The first artist’s impressions of Oxford University’s Big Data Institute, which will be the next addition to the Old Road Campus, have been released. It’s being described as having a “ship’s prow”.

There was a break-in at The Six Bells on Beaumont Road, Quarry in the early hours of Sunday morning last week (15 June). The intruder forced a window, broke into a fruit machine and stole cash and spirits. Police are appealing for information.