The new Maggie’s centre opened at the Churchill on Tuesday.

The new development on the old cricket ground on Barton Road is to be called “The Willows”. The name was the most popular at the last Headington Ward Focus meeting.

Quarry & Risinghurst labour Councillor @laurencepbaxter is standing down as he is leaving Oxford to take up a teaching post in Prague. Expect a by-election in August or September.

A two-week hearing begins today (7 July) to decide whether the Foxwell Drive Town Green application will be granted. The decision will affect the access to and from the new Barton Park estate.

There are grants of up to £15,000 available for Headington businesses who want to promote sustainable transport by encouraging their employees to use public transport, cycling, car sharing etc. Public sector employers, charities and community groups are also included in the Travel Choices Initiative scheme.

A news story broke on Wednesday that a convicted paedophile “living in Headington” (apparently Ivy Lane) has gone on the run having failed to turn up for a court hearing. Police are asking for information.

A 20-year old man from Coleman’s Hill (near the Green Road roundabout) has been charged with sexually assaulting two teenage girls in Headington in March. He has been bailed to appear before magistrates in September.

@OBSUJazzSociety entertained shoppers and passers-by outside Waitrose on Friday to mark the store’s Partnership Day.

Signs have gone up in the window of Café Corsica implying that Oxford Designer Blinds are opening there.

The JR’s car park number 2 (outside the Women’s Centre) has had a much-needed resurfacing. 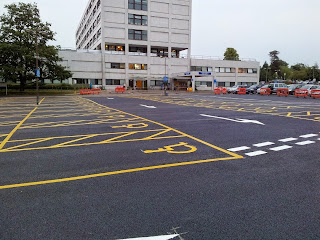 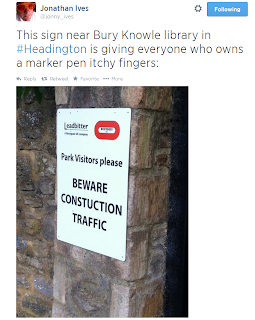 Only one active post on the Headington & Marston e-democracy forum this week: