It’s been Brookes Freshers’ Fair this week. A series of these stencilled messages appeared on the pavements along the London Road, ruffling a few feathers among local residents. A day or two later some attempt had been made to scrub them out. (Picture c/o @Mike_Rat.) 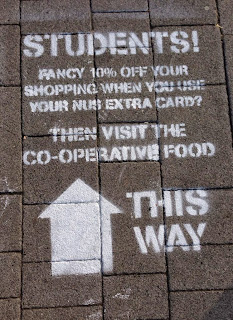 A woman was followed into her flat in Roosevelt Drive and raped in the early hours of Saturday morning. A man has been arrested and is in police custody.

In what may signal the start of the much-delayed work on the London Road the bus shelter opposite Douglas Veale House, near the Green Road roundabout, has disappeared.

A traffic incident involving a car fire closed the same section of the London Road for a time on Friday morning.

The Headington stench returned on Friday evening and was still there on Sunday.

A new convenience store opened at 8.00 this morning in the colonnade at @Oxford_Brookes Headington campus.