Here’s my weekly round-up of local news for 30 November – 6 December.

There’s a public meeting about the Hospital Energy Project on Wednesday 9 December (this week), at 7.00pm at All Saints’ Church House, New High Street. It’s organised by our local councillors and Headington Action, and they hope someone from the project team will be there to hear concerns and answer questions. 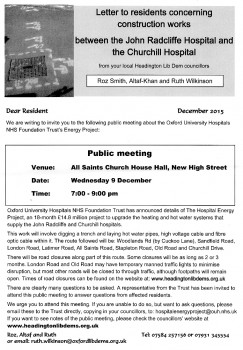 The Estates Department of OUH NHS Foundation Trust has started a twitter account to tell people about the Energy Project (it’s so much more than a heatpipe!). You can find them @OUH_Estates.

The long-delayed work to renovate Oxford’s tower blocks, including Northway & Wood Farm, will start in January.

The @BartonPark_ housebuilders Hill won the Housebuilder of the Year award.

Here’s a nice little snippet of local news from @friendlyevalley

Kingfisher spotted in Lye Valley for 2nd time. Recent Wild Oxford work opening up ponds makes it even more attractive to them @BBOWT

Firefighters were called to the (unstaffed) telephone exchange behind the Shell petrol station on London Road on Thursday. The fire was caused by a battery overheating. My favourite Headington-related tweet of the week:

Can’t believe there is nowhere to buy croissants at 6am in headington — dominik (@dominikayak) December 2, 2015