After last week’s sparse Headington Headlines some more news for that week, all criminal, came to light.

Burglars stole identification cards, a large quantity of gold including chains, rings and bracelets and £2,500 from a house in Cherwell Drive on Tuesday 13 Nov. Police are appealing for any information.

A woman had her bag stolen by a man who attacked her on Friday 16 Nov. The incident happened at about 10:50pm on the corner of Gladstone Road and Trafford Road.

Sub-postmaster Shiv Singhal was attacked in Atkyns Road, Wood Farm near his home early in the morning of Saturday 17 Nov. The attackers threatened to kill his wife if he didn’t hand over his money, keys and phone then went to his house and stole his car.

And after a much more active week in OX3 here’s my weekly round-up of local news for 19 – 25 November.

Bill McCarthy, Baron McCarthy of Headington, who won a scholarship to Ruskin College before moving on to Merton and Nuffield, died on Sunday 18 November. He was a prominent part of the trade union movement and lived in Headington.

C S Lewis, who lived in Headington and is buried in Holy Trinity Churchyard in Quarry is to be commemorated with a plaque in Poets’ Corner, Westminster Abbey.

Meanwhile the dispute over proposals to alter the interior of Holy Trinity and build over part of the churchyard rumbles on in the e-democracy forum.

A significant step towards the realisation of the Barton West development was taken when the Inspector’s report was published, concluding that the Barton Area Action Plan provides an appropriate basis for the planning of the area. The report will go to the Council Meeting on 17th December with a recommendation that Members adopt the Action Plan. Oxford Mail report | Download the Inspector’s report in full.

Children at three schools in Headington – @WindmillOxford, St Andrew’s Primary and Headington Quarry Nursery dressed up as zebras on Tuesday as part of a campaign to get more zebra crossings installed. @greenoakoxford posted this picture and The Oxford Mail reported.

A Marston-based blog has started – @MarstonBlog run by @TimDavies. Among other things there’s a summary report of the Marston Community-Led Planning workshop held in Mortimer Hall, Old Marston on Tuesday.

Despite strong opposition expressed during public consultation, County officers are recommending that Windmill School should be expanded to be three-form entry. Documentation here.

A plaque was unveiled outside the library in Bury Knowle Park on Saturday, commemorating the planting of an oak tree as part of the Diamond Jubilee celebrations.

High water levels in the Cherwell flooded the gardens of the Victoria Arms @VictoriaArms in Marston. This picture was taken at 11.30 on Saturday morning. 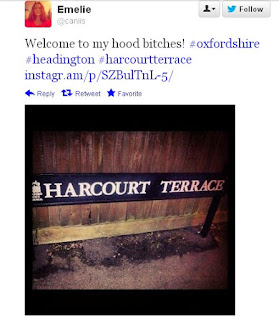