Earlier this month I wrote about the sorry tale of Oxfordshire County Council’s commissioning of a ‘Headington Transport Strategy’ which was to be drawn up with no local involvement apart from the big employers and Oxford City Council. Not even local County or City Councillors knew about the project until it was well under way.

Plenty of people were upset about this when the news broke and they told the County so. County planning officers came to a meeting with the message “Don’t worry, we didn’t mean it”. And now three weeks later the County has announced a public consultation to run for a month. 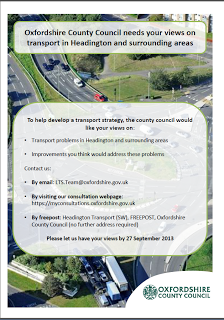 Interestingly, the form of this consultation is open-ended: there is no document on which people’s views are sought. We are just asked to give our thoughts on transport problems and possible improvements. It does beg the question of what has happened to the Strategy the County’s consultants should by now – according to the original timetable – have more-or-less finished. If this re-think by the County is to be at all meaningful we must hope that work on the consultants’ report is on hold so they can take notice of the views and ideas of the local community which lives with Headington’s transport problems every day. If you use the online form rather than email you have up to 40,000 characters to express your views!