Here’s my weekly round-up of local news for 26 October – 1 November.

The Stansfeld Outdoor Centre in Quarry Road is to be run by The Oxford Trust @scienceoxford.

Oxfordshire County Council has issued some more information on what happens next with the Access to Headington proposals.

The spine road through the Barton Park development is going to be called Barton Fields Road. The earlier proposal of Barton Park Road has been rejected following local protests.

An article in @TheOxfordMail describes the efforts @TheAmpRevival are making to raise funds to buy the Risinhurst pub.

It looks like the conversion of the offices above Kennett House (Iceland & others) into flats is going ahead, but the application to add an extra storey to the building has been withdrawn.

@OxfordCity announced a £2.2m scheme to protect properties in Marston and Northway from flooding. The scheme still has to be appproved at the City’s Executive Board next month.

Urban designers, planners and architects @WestWaddyADP have won an award for ‘Excellence in Masterplanning and Design’ at RTPI South East Planning Awards for their long-term work with @Oxford_Brookes.

This is what happens, kids, if you make a daft pledge on TV. You’ve been warned. http://t.co/r5SWfRmCCT pic.twitter.com/LYn5ob33St

The contract managers for @BartonPark_ are holding a “Meet the Buyer” event for materials suppliers for the development. It’s on Wednesday 21 October from 10.00 to 16.00 at the Community Centre on Underhill Circus, and will be opened by Council Leader Bob Price.

In other Barton Park news, reports that Barton residents are unhappy with the intention to call the main street through the development Barton Park Road, and further that they don’t think much of the name Barton Park anyway will come as no surprise to dedicated readers of this blog. You may remember that two years ago I challenged the developers’ original claim to have consulted the community over the name and never got any satisfactory answers to my questions.

The planning application (Ref: 15/02543/FUL) for the erection of 3-storey building to provide 30 ensuite student rooms on the site of the old Friar pub on Marston Road is on the City Council’s website. The front elevation looks like this.

After persistent campaigning by residents, official speed warning signs have appeared in Quarry (via @danlevs). 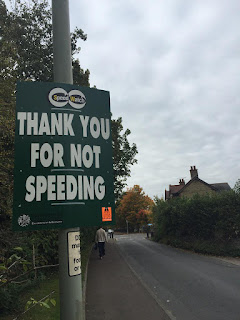 Oxfordshire County Council has published a “Summary of Feedback” to the Access to Headington proposals earlier this year. I collected a number of responses from people and organisations at the time – see this link.

The jury at the inquest into the death of Connor Sparrowhawk at Slade House in July 2013 found that neglect contributed to his death. Slade House, run by Southern Health NHS Foundation Trust, is now closed. The Trust has “unresevedly apologised” for its failings. As I reported last year, the Trust has been criticised for failings at other units it operates.

Jessica Bruce of Risinghurst is claiming a World Record for running a marathon pushing a baby buggy. She and her 7 month old son Daniel finished the Abingdon marathon on Sunday in 3 hours 17 mins 51 seconds.

My favourite Headington-related tweet of the week (for all the wrong reasons!):

A report in @TheOxfordMail says – unsurprisingly – that the two Oxford bus companies support the Access to Headington scheme. Here is the article.