Skip to content
See all my blog posts on the PCC elections by clicking the PCC label in the tag list on the right, or go to tonyox3.blogspot.co.uk/search/label/PCC.

I’ve been thinking about how you choose your second vote. Is there any case for tactical voting or should you just vote for your second favourite? Probably the latter but not necessarily, I suggest. If you need a reminder of how the voting system works, see here under ‘Voting Procedure’.

The problem is we have virtually no idea how the voting will go in this election. There’s no history and very little demographic analysis. In the Thames Valley you might think the six candidates form three natural pairings, Con/UKIP, Labour/LibDem, and the two Independents, any or all of which could split their supporters’ votes. If the turnout is as low as expected you might also think that those who do turn out will tend to vote along party loyalty lines, which would favour the three main parties. But in our case Barry Cooper of UKIP has mounted a strong campaign and could take votes from Conservative and disillusioned LibDem supporters. The two Independent candidates may well benefit from the popular line of keeping party politics out of this election.

So I think we can’t rule out a situation where after the first preference votes are counted most or even all the candidates are fairly close together. If this happens the top two candidates could be any of the six and the final outcome almost random. Does this affect how you should choose your second preference?

I think the answer is generally ‘No’ – you should choose your second preference as the candidate you would like to see as PCC if your first choice isn’t elected. A situation I can see where this isn’t true is if your first vote is going to a candidate who you don’t think has a chance but for whom you want to vote anyway to make a point. In that case you can either not give a second choice (it’s not compulsory) or if you don’t want to waste your second vote you should give it to the candidate you rate “least-worst” of the ones you think may be top runners. This might not be your actual second choice preference, but to vote for two no-chancers (as you see them) is a waste of time because your second vote won’t be allocated to one of the top two so won’t be counted. 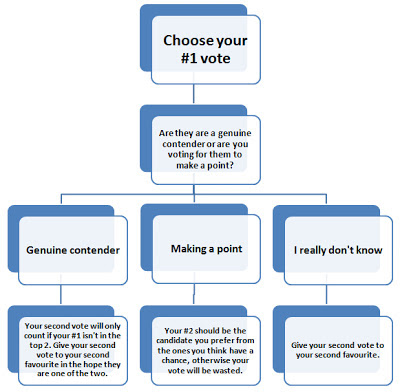 Even so, given the uncertainties and with the best will in the world anyone may end up with their number one choice not being in the top two and their second vote not being counted because it’s not for one of the top two either.

But hey, folks, whatever happens turn out and vote on Thursday! Let’s get Thames Valley confounding the doomsayers with a turnout well above the national average!