The official website for these elections has gone live and has details on all the candidates. Find the Thames Valley candidates at www.choosemypcc.org.uk.

Independent candidate Geoff Howard’s details are there, and I’ve summarised them below in the same format as the other candidates in my previous post.

Geoff Howard, Independent
Background: Former Head of Department in a Slough Secondary School. Businessman for 27 years. Magistrate for 20 years chairing Adult and Youth Courts in Berkshire. Former Slough Borough Councillor for 13 years.
Headlines: Politics should play no part in this role. Manage efficiency savings: no reduction in ‘bobbies on the beat’.
Top 3 crime priorities: Concentrate on tackling crimes that affect people locally. Manage efficiency savings demanded by Government without damaging the interests of the community. [Note: The choosemypcc website doesn’t ask this specific question so I have extracted this from GH’s statement.]

I’ll read the other candidates’ statements later and if there is anything new I’ll post it.

If you’ve had the booklet from the Electoral Commission through your letterbox you’ve probably seen that you’ll be able to vote for up to 2 candidates. What it doesn’t tell you is how the votes will be counted – you have to look that up on a website called aboutmyvote.co.uk. It’s called the “supplementary vote system” and to save you the trouble, here’s how it works:- 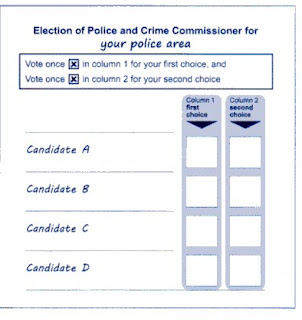 I hope that’s all clear. And no, I don’t know why they’re using this system. If anybody does please leave a comment.