Yesterday’s test-drive of the new autumn and winter menu at the Ashmolean Dining Room wasn’t quite what I was expecting. The good news is it was much better! A free glass of something bubbly on arrival – yes, that was on the invitation. A full sit-down multi-course meal served at your table, that was not what I’d anticipated. I’d been thinking more along the lines of a crowd of people standing around while waiting staff brought round trays of bite-sized tasters. So well done to manager Andrew Cashin and his team for exceeding expectations and taking the risk of asking Oxford’s twitterati (and some others) what they thought of the new dishes.

@OxSox, @RuthWilk and I met beforehand and walked along to the restaurant together to meet @kalicer. The four of us were given a table together. Others have described how the event was managed (links below) so I’ll just briefly say we were brought a series of plate-size portions of nearly every starter, main course and dessert to sample between us. A bottle of white and a bottle of red (not part of the freebie) helped us enjoy the tasting and keep the discussion flowing.

My mobile phone (now officially achieving ‘classic’ status) is not great at photos so if you want pictures of the food follow the links to other reviews. My contribution is to bring you the menu. I should say that this is not the defintitive final version to be offered – some dishes may change or disappear, and prices may change too when it goes live in September. 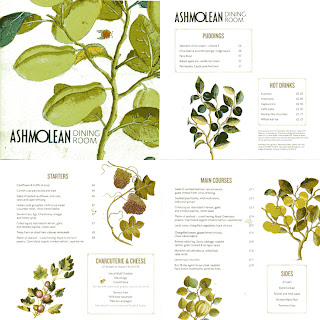 And so to the food. My favorite from the starters was the Serrano ham and figs, with the slightly sweet and sticky dressing complementing the ham nicely. The seafood platter was also good, especially the cured herring, although I agree with others’ comments about the disappointing prawns. The cauliflower & truffle oil soup was creamy and had a good flavour but was maybe a bit rich as a starter. The crab panacotta was again a good flavour but could have done with more crab meat. To me the gravadlax couldn’t be distinguished from straight smoked salmon but as a smoked/cured salmon starter it was fine. I don’t really do seafood so can’t comment on the squid. Although some of my companions thought the cauliflower and pine nuts a bit bland I liked it, but I wonder whether having cauliflower as the basis for both vegetarian starters is a good idea.

Beetroot is never served in the OX3 household, though I personally don’t have a problem with it. As one of the vegetarian main courses the candied beetroot and goat’s cheese fritter was novel and successful. The pearl barley, wild mushrooms, leek and spinach topped it though, having us playing pass-the-parcel taking smaller and smaller portions from the plate as no-one wanted to seem rude by finishing it off.

There were three fish dishes. The whole bream was nicely grilled with firm flesh, and the monkfish saltimbocca with salsa verde worked well. The lemon sole meunière was a bit dull, but maybe that’s not a surprise. Which leaves the meat courses. The lamb, a standard choice for anyone wanting something plain, was just that. You’d get what you expected, though the meat itself was a little chewy. But the rabbit would be high on my list to order again. Not too highly-flavoured but definitely rabbit, spiced up with the mustard and tarragon sauce and served with unfussy vegetables. There was steak on the menu but it either wasn’t served or it by-passed us.

Only three made it to our table. The pannacotta and poached pear was good, light, and wouldn’t leave you feeling over-full. The chocolate and amaretti sponge on the other hand certainly would. It was an interesting combination: the almond flavour of the amaretti took a little while to come through, but when it did it took the edge off the chocolatey sweetness of the sponge. Paris Brest? What’s that? Isn’t it a bike race? In this case it was a saucer-sized round of flaky pastry, topped with roasted almonds and with a soft filling which I think was chestnut (marron). Whatever it was it was a hit!

And so, the overall conclusion. I think the new menu will be popular, especially after a little tweaking, and I think that was the consensus on our table. I’m not completely sure what the Ashmolean Restaurant’s target market is, but with this menu it’s aiming for people who want good food nicely prepared and presented, nothing too extreme or fashionable and not in any one particular style. It’s a something-for-everyone menu, and none the worse for that. There’s surely a market for that in Oxford, and I hope they do well with it over the winter season.