The Oxonbike hire scheme went live on 19 June, at first with six and now seven locations in and around Headington. The ‘home base’ is Thornhill Park & Ride and the other stations are at what are thought to be the most heavily used local destinations – the hospitals, Oxford Brookes’ Gipsy Lane and Oxford University’s Old Road campuses and Headington shops.

The scheme aims to provide a clean, green alternative to car use, helping to reduce congestion and the load on some public transport routes and providing a convenient way of getting to some locations not well-served by public transport from the park & ride. If the scheme is a success it will be expanded to other sites including locations in the City Centre.

It only costs a one-off fee of £1 to register to use the bikes and as long as you dock your bike at one of the hire stations within half an hour of hiring it’s free. Longer hires incur a charge which increases rapidly with time. While you have the bike you can park it anywhere (locked of course!) as the lock is portable, but your hire period only ends when you lock it at a hire station. In fact you can leave it close by – the bikes have an on-board solar powered GPS tracker which will confirm whether it counts as being at a station or not. This is helpful because you’re very likely to find other bikes using the same racks and taking up space. 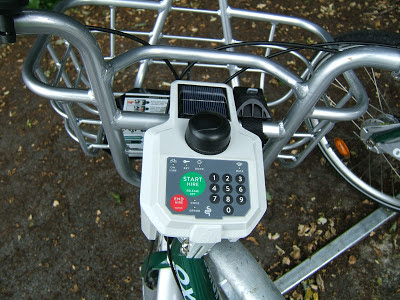 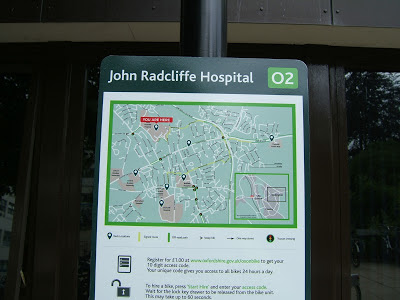 There are instructions at each hire station.

Most of the stations are easy to track down once you know where to look (the one at the JR is the least obvious), but to help you out and reassure the nervous I’ve put them all on this map. You’ll need to view it full size and it’s worth viewing it in satellite mode too to get a better idea of the sites. Click on a marker for a brief description and a photograph (click the photo to enlarge).