Here are some photos I took today on visits to four of the places taking part in the Open Doors scheme organised by the Oxford Preservation Trust.

This building, completed in 2008 and known as "New Biochem", won a RIBA award for its architects HawkinsBrown. Built around a full-height atrium the building is designed to encourage mingling and interaction among the researchers who work there. The interior bridges and flying staircases, reminiscent of Escher, are a striking feature. Extensive use of glass and light-coloured wood make the atrium light and bright. The wood cladding also helps quieten the atrium space.

An art programme, "Salt Bridges", makes an important contribution to the creative environment. The birds in the pictures below are part of a structure "Chandelier" by Annie Cottrell which explores the fusion of many parts into one unit. The disc of lights in the first picture is an arrangement of 256 lights whose individual colours vary according to a randomly generated sequence which takes the display from all black to all white over a three hour period. Each black-to-white sequence is different. This work "Light Cycle" is by digital artist Tim Head. 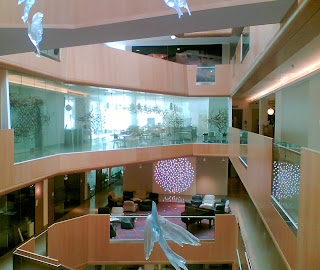 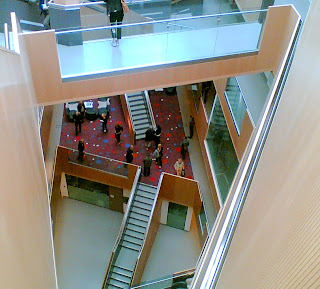 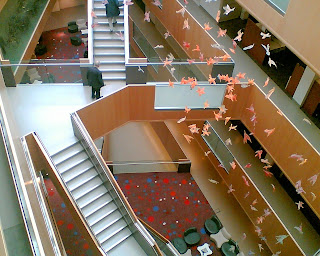 The Old Library, built in 1320, is the oldest University (as opposed to College) building in Oxford. The books held here were transferred to Duke Humfreys’ Library in the Bodleian in 1450 as part of its founding collection. 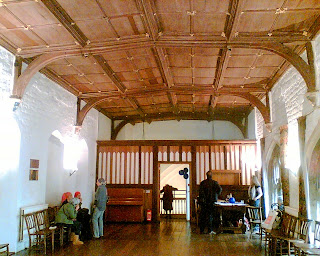 Interior of the Old Library

The original church on this site dates to about 1100, with a tower and aisles added a century later. The tower was rebuilt in the 15th century. The church was ‘made redundant’ in 2008, and in 2009 Balliol acquired a 999-year lease with a licence to create a Historic Collections Centre. Building work was completed in 2010 and the Collections Centre opened this year. 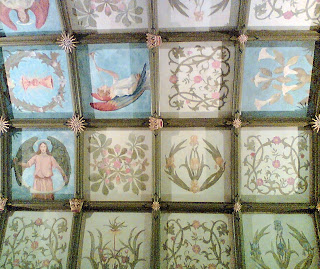 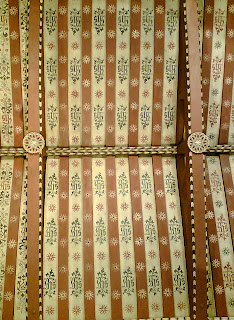 Another part of the restored ceiling

Little remains of the original 16th century manor house but it has surprisingly extensive gardens. The house provides residential accommodation for post-graduate students of Balliol College. 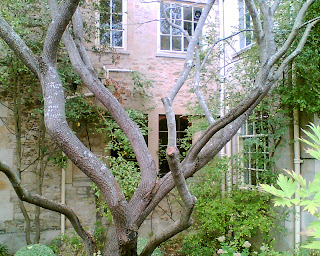 In the gardens of Holywell Manor "Mollusc" sculpture in a corner of Holywell Manor Gardens