A rather quiet week this week, apart from a story that I suspect will become quite big ………

A major planning application came to light this week. It’s for 57 houses and apartments on two sites on the edge of Barton and Bayswater Farm in South Oxfordshire District. It involves demolishing two houses on Waynflete Road (in Oxford City) to provide access to one of the sites.

A young woman suffered an attempted sexual assault in Headington Hill Park early on Wednesday morning. Police are linking the assault with two other recent incidents, one on Old Road and one on Pullen’s Lane, and are apppealing for witnesses and information. On Sunday <a href=”http://www.oxfordmail.co.uk/news/14433029.Man_charged_after_woman_sexually_assaulted_in_park/”>a man was charged</a> with sexual assault in relation to the incident.

News broke yesterday that South Oxfordshire District Council (SODC) is considering land at Bayswater Farm on the edge of Barton for housing development. The story seems to originate here, a news release from SODC in mid-June. It explains that their plans to meet new housing requirements partially from ‘windfall’ sites were thrown out by a planning inspector so they have had to look again at where 800 new homes that they had allocated to unspecified windfall sites could go. Under the broad heading ‘larger villages’ the phrase ‘land at Bayswater Farm’ is included. The changed strategy went before a full Council meeting on 30 June – the minutes don’t seem to be online yet, but I believe the Council did approve the revised strategy.

Local people are very aware of Oxford City’s proposed expansion of Barton, but probably not many realised that SODC’s boundary came so close. The maps confirm that the City/SODC boundary runs along the backs of the gardens on the edge of Barton and Sandhills. 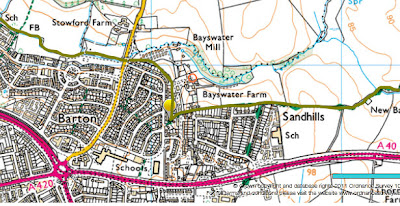 What is not clear is whether SODC owns any of the land around Bayswater Farm, nor is there any indication of how many houses they might hope to build there. To put it in perspective, Oxford City’s Barton West development is said to be of the order of 1000 homes. There does not seem to be a map among the documents that went to the Council meeting.

Whatever the merits or otherwise of SODC’s proposals, it is obvious that any development adjoining existing or new housing in Barton should be integrated with the City’s plans.