The Planning Review Committee approved the application by @TheSpiritofToad to add a café to their South Park distillery.

A cat called Blue made the mainstream news. He was found up a tree in Hawthorn Avenue with his leg caught in a rat trap; his leg had to be amputated.

Now here’s a strange thing. The first houses being built in @BartonPark_ are being marketed under the name “Mosaics Oxford”. The marketing campaign has emerged on twitter as @Mosaics_Oxford and they have a website which was first registered in April last year — mosaicsoxford.co.uk.  The copyright tag on the website shows that Mosaics is another face of the builders of Phase 1, Hill. Mosaics Oxford is, they claim, a “vibrant new community”, “nestled next to Oxford’s bustling city centre”. Devoted readers will recall that an important selling point of Barton Park was how the new development would integrate with existing Barton to their mutual benefit. Strange then that the word ‘Barton’ (with or without the ‘Park’) doesn’t appear anywhere in Mosaics’ sales pitch. The street address of the marketing office (or ‘suite’, as they prefer to style it) is just a postcode which places it in St Aldates.

A consultation has opened on a proposal for a 20mph speed limit along the whole length of Windmill Road as part of the Access to Headington scheme. Various documents, none of them going into any detail or presenting any evidence about what the effect might be, are here on the County’s website, from where you can also submit your comments. The consultation closes on 11 August.

Electric Aids has moved out of their Windmill Road shop. A notice in the window says they will continue trading, but doesn’t say where.

The Bullingdon Community Centre in Peat Moors was closed abruptly by the council after the structure was found to have deteriorated.

The Headington Neighbourhood Plan was passed by Oxford City Council to go forward for formal consultation. Following the six week public consultation the Council and the Neighbourhood Plan Forum will make any necessary amendments. The Council will then arrange for an independent external inspector to examine the draft Plan. If the inspector confirms that the Plan is satisfactory it will be the subject of a public referendum programmed for May 2017. See the full announcement on the Plan’s website.

The ex-bed shop on the corner of Old High Street is becoming an Italian restaurant, Buongiorno e Buonasera. They already have a restaurant in Gloucester Green. @LuigiMutti tells me it’s due to open on 20 September.

I wrote a short review of Headington’s independent café and gelatería Adria.

Local MP @AndrewSmithMP has said that the dysfunctional Southern Health NHS Foundation Trust should be broken up.

The Triangle Nursery has opened on the Old Road Campus, catering for children aged 4 months to 5 years.

A planning application to build 52 homes just off Waynflete Road in Barton has been approved – not by Oxford City but by South Oxfordshire Council. The land is just outside the city boundary. See my original note in HH #262.

Struggling for a Headington Olympic connection the only one I’ve found so far is Katherine Grainger’s silver medal in the women’s double sculls. Katherine is Chancellor of @Oxford_Brookes, a position she has held since March 2015. She has now won more Olympic medals (5) than any other female British athlete.

Slightly off Headington’s main drag a few doors down Windmill Road is independent café and gelatería Adria, which opened in February this year. I went for the first time today, and now I’m sorry I hadn’t been before. It was mid-morning so I was looking for coffee and a pastry. Sadly, pastries weren’t on offer (the owner explained he had tried them but they didn’t sell well) and loyal readers will know I’m not a fan of cake in the morning (there was carrot cake), so it had to be ice cream. As you’d expect in a gelatería, there was ice cream. About 16 varieties including two or three sorbets, in a range of subdued (vanilla, choclolate) and garish (bubblegum) colours. I opted for coffee and a scoop of stracciatella; my companion chose coffee and lemon sorbet, all of which were excellent.

There’s a nice atmosphere too – tables and comfortable chairs inside, including some neat child-size armchairs, and more tables and chairs on the pavement outside. The décor is calm and stylish, a background rather than a feature. 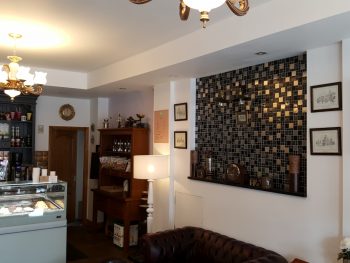 As well as coffee and ice cream Adria offers soft drinks, a wide choice of herbal teas and a food menu of pizzas and toasted sandwiches. Well, I didn’t ask, but I assume ‘baked’ means ‘toasted’.

Adria isn’t on twitter and the owner said he’s still working on setting up a facebook page. I hope he doesn’t leave it too long because a small independent needs people to know about it, and I suspect Adria isn’t as well-known as it deserves to be. I’ll certainly go back, and when I do I’ll suggest that if they can’t offer pastries then a jar or two of upmarket cookies might fill the gap. 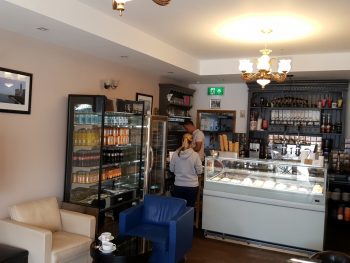