A medical tribunal has found that the ‘fitness to practise’ of the doctor responsible for Connor Sparrowhawk’s care when he died at Slade House in 2013 has been impaired. A decision on appropriate disciplinary action will be taken in December.

Thames Water did a CCTV survey of the Kennett Road sinkhole and declared it was not their problem. The hole was finally filled in permanently* on Thursday.
* Allegedly.

As predicted, the EF planning application for Cotuit Hall has been called in to the Planning Review Committee. The next meeting is on 13 December.

The houses being built behind Waynflete Road in Barton (see original report in HH 262) are being marketed by Cala Homes. Although they are in Barton the site is in South Oxford District Council.

They haven’t said why, but Oxford Bus Company announced that as from yesterday (Sunday), the 400 P&R service will once again be stopping at both the Headington School and Brookes/Headington Hill stops in both directions.

Kennett Road still closed this morning. Here’s man sent by Thames Water looking for a manhole. For those bored with this sink hole, the picture includes an example of typical hire-bike parking pic.twitter.com/ds6tURiVuC

There were no new posts on the Headington & Marston e-democracy forum this week:

However, the full Committee papers barely mentioned the Headington Neighbourhood Plan (HNP) and it was not at all obvious that the Plan’s policies had been taken into account. After local councillors intervened a supplementary note was presented to the Committee on the day. This note examined all the relevant HNP policies and advised they were all complied with. Two local groups spoke against the application, which was subjected to a thorough examination, and EAPC turned the application down by a 4-2 [correction: 5-3 – see comment below] vote with one abstention.

The minutes of the meeting are now public on the Council website; I’ve also extracted the text and uploaded it here. The minutes record the reasons the Committee refused the application; there are several, including four HNP policies where the Committee went against the officers and concluded they were not complied with. These are:

Full details of these policies are in the Neighbourhood Plan.

Ruth Wilkinson has reported that Councillors are being bombarded with emails from EF staff asking for the application to be called in to the Planning Review Committee (PRC).

It seems to me quite likely that it will be called in and the PRC will overturn the decision. They will grant permission because they don’t want to get into a costly appeal process. If it’s not called in I think we can assume EF will appeal anyway. Either way it will be a good indication of the City’s commitment to the NP, and if it comes to appeal, of the status of the NP in the Inspector’s eyes. I’ve read that Inspectors elsewhere have supported Neighbourhood Plans and rejected appeals which would overturn them.

However, compliance with these particular policies will always be a matter of judgement and there is a weakness in the planning system which is easy to exploit. Planning permission is often granted with conditions which the developer has to meet within a specified timescale. It is usually delegated to officers to decide if the condition has been met: the developer (or their consultants) prepares a document, submits it to the Council and it is nodded through with little scrutiny, however good or bad the document may be. I’ll stick my neck out and forecast this is what will happen here: the application will be called in; the PRC will grant permission with conditions which they can claim will satisfy the various policy requirements; there will be a lull; documents addressing some of the conditions will be prepared, submitted and approved with almost no scrutiny; for other conditions the developers will request and be granted a variation of conditions which lets them avoid compliance; the development will go ahead more-or-less as it now stands and no benefit will have been gained for the local community and environment.

To call in the application needs twelve councillors to request it by 5pm next Tuesday (14 November). So for now we wait and see.

On a more positive note the city’s planning paperwork is being changed to explicitly include the Headington Plan where relevant, with instructions that the Plan’s policies must be given full consideration and weight.

Your weekly round-up of local news for 30 October – 5 November.

Police cordoned off part of Copse Lane in Marston last weekend after reports that a teenage girl had been assaulted.

EF International’s planning application to redevelop their site at Cotuit Hall (reported in HH312) goes to the east Area Planning Committee on Wednesday this week (8 November). The officers’ recommendation is to approve the application subject to conditions. One of the conditions is for a travel plan:

The plan shall detail how pupil access to the site is to be managed, including at start/end of terms, how vehicle movements to and from the site are to be minimised, the means for implementing the plan, method of monitoring and amending the plan on an annual basis. The results of the annual monitoring exercise shall be submitted to the local planning authority in writing and the travel plan amended accordingly in light of discussions with the local planning authority.

Since then work has started to install the missing racks. 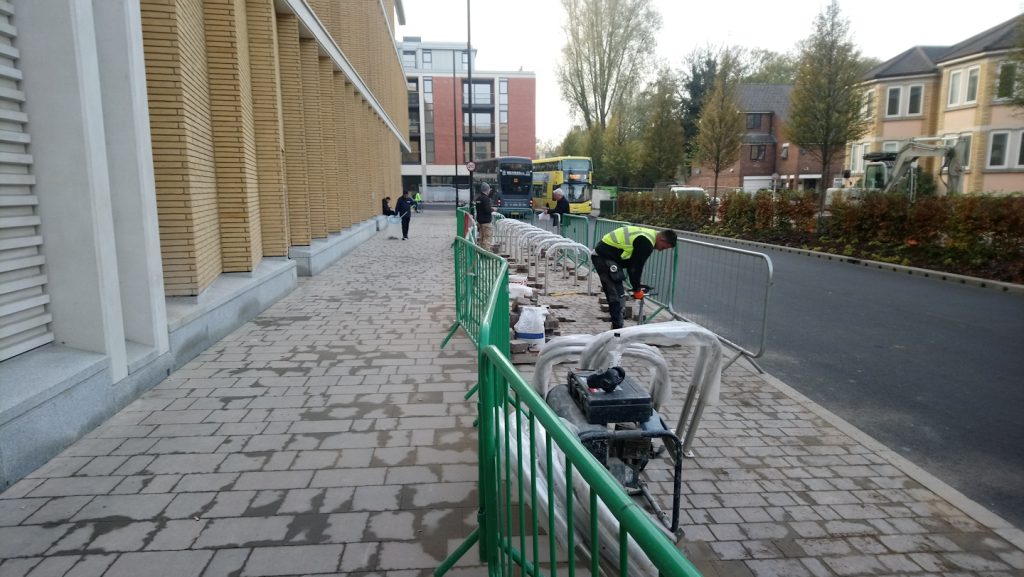 Staying with the cycling theme, here’s our very own EF language schools in their latest sponsorship venture. This is a World Tour Team so expect to see them in all the big races.

The highest-ranked football team based in OX3, @OxCityFC, who are second bottom in the National League South, pulled off a great victory against League Two’s Colchester, 56 places above them, with a 1-0 away win in the first round of the FA Cup.

Following the official opening of the Margaret Road sports pavilion last week, here’s the Oxford Mail’s article and picture gallery about it.

Hi – bunching is absurd on Headington routes tonight just in parade of six buses – a U1 and 5 8/9s pic.twitter.com/ByZrJQYoBU