Marston residents will be surveyed about the possible introduction of permit-only parking.

Cheney School Academy Trust has been recommended to run the new primary school that will be built in @BartonPark_. As well as the eponymous secondary school, Cheney also runs Bayards Hill Primary in Barton. A final decision will follow later, but with local support it’s fairly sure to happen.

The site of the old Friar pub on Marston Road has been put up for sale by Tesco after the company abandoned its plans to open a new store there.

An overflowing sewer in Barton caused raw sewage to flow down the street.

Headington Action @HeadingtonA have shared their reponse to Oxfordshire CC’s long-term transport strategy “Connecting Oxfordshire”, or LTP4, on the Oxford Futures website. (Oxford Futures is an initiative of Oxford Civic Society @oxcivicsoc.) Have any other Headington organisations or individuals responded? It would be interesting to see any more.

The planning application (Ref: 15/00858/FUL) to build student accommodation on the corner of Latimer Road is now on the City Council’s website.

@Headingtonnews has compiled a handy list of the Christmas and New Year opening times of the local food shops.

The quickly-mounted camapign to stop BT removing the red phone box in Old Headington has been successful. @RuthWilk, who played a big part herself, paid tribute to the others involved. The story made the Oxford Mail on Wednesday. The start of the story and links to background are in HH 141. Finally, Ruth announced on Friday that BT have agreed to sell the phone box to Headington Action for £1 subject to conditions on its future use which don’t seem to onerous. Ruth’s summary of the campaign and its outcome is here.

Oxford Brookes Community Liaison team @BrookesCLO put up Christmas decorations in Headington, all made out of recycled materials.

The Stansfeld Education Centre, at the end of Douglas Downes Close off Quarry Road is owned by Birmingham City Council. It is losing money and Birmingham City is consulting on its future. The Centre, also known as The Forest School, is also used by local groups including schools, scouts and guides. The whole site covers 17 acres. More information on these links:


View in a larger map

Friends of Quarry have drawn up a comprehensive set of proposals for tackling the traffic problems in Quarry. Worth reading!

In a confusion of several myths (King Alfred, Father Christmas, Narnia ….?) the Fire Services were called to an incident in Kiln Lane, Risinghurst when a batch of mince pies caught fire in the Community Centre oven.

Here’s my weekly round-up of local news for 28 October – 3 November.

Headington and other OX3 areas came through the storm of Monday morning unscathed.

Morrisons opened on Monday as announced – it was even early, opening before 9:00.

A new business networking group for Headington has been started by @TheOxonProject. Its first meeting is today (4 Nov); details here.

The yellow-box junction of Wharton Road with London Road is to be reinstated with money from @RosalindRogers‘ Area Steward’s Fund.

It seems @oxfordkebabs is moving into the Café Noir spot on Osler Road. 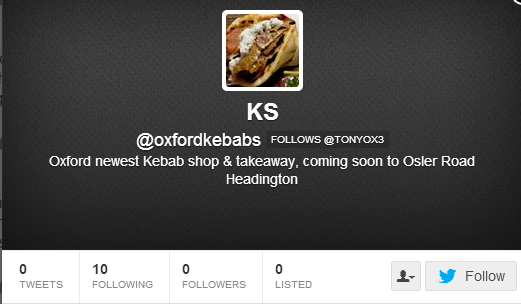 Friends of Old Headington have let me put their response to the County’s Headington Transport Strategy on the blog. Any more?

The Sandhills underpass is being smartened up and decorated with artwork by Wheatley Park students.

A young man was robbed in Pullens Lane on Wednesday evening. Two attackers stole his rucksack containing an HTC mobile phone, a Sony camera, text books and a wallet.

It seems that anti-social student behaviour has been worse this new academic year than for several years. Brookes, the City Council and residents are all working to do what they can to bring it under control. 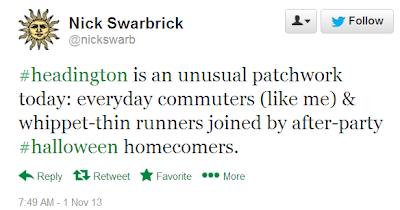