Here’s my weekly round-up of local news for 25 November – 1 December.

Brambles closed its doors for the last time. Well-wishers, souvenir hunters and opportunists were buying stock and fittings up to the last minute. 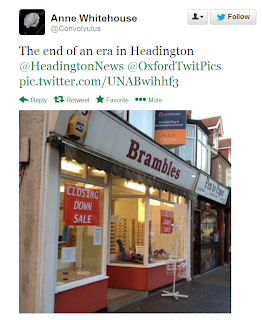 Talking of twitter accounts, I wrote a short article about some local schools’ failure at ‘doing twitter’.

Is this a new toilet facility or the latest incarnation of the Tardis behind @JacobsandField? No, they’re building an extension apparently. 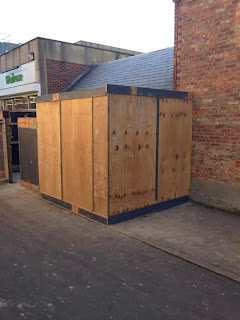 A story surfaced about a suggestion that land next to C S Lewis’ house ‘Narnia’ in Kiln Lane, Risinghurst might be used to build sheltered housing. As far as I know there’s no planning application as yet, so nothing to comment on other than the story and the editorial comment in Thhe Oxford Times.

The @OxfordBusCo released pictures of its new and bigger coaches for the X90 London service. They say the livery is ‘dual-branded’ so they can use them on the airport services too. The larger coaches will initially be used to provide extra capacity at peak times starting in early December.

A firm of plumbers from Manchester was fined for fly-tipping in a field north of Barton off Bayswater Road.

A care home at Slade House on Horspath Driftway has been closed to new admissions by the Care Quality Commission, who found serious failings in the treatment of patients and the state of the facilities. Slade House is owned and run by Southern Health NHS Trust, who bought it from the Oxfordshire Learning Disability NHS Trust, also known as the Ridgeway Partnership, a year ago.

The new grit bin (originally reported here in October) has been installed on the corner of Ethelred Court and Dunstan Road. Headington Ward’s LibDem councillors and the Friends of Old Headington provided the funds.