Developers @BartonPark_ announced a start on site involving the clearing of some trees and hedges.

The home of John Henry Brookes, after whom Oxford Brookes University is named, is on the market for £1m. It is in The Slade.

The next stage has been reached in the preparation of Headington’s Neighbourhood Plan @HeadingtonPlan. The application to the City Council to ‘designate’ – i.e. agree – the area covered by the plan has been put out to public consultation. Details and links on the Council’s website. The consultation closes on 28 March.

A man from Saxon Way was sentenced on Tuesday to five month’s imprisonment for a racist verbal attack on his girlfriend’s neighbour.

Warneford Lane is closed for roadworks for approximately three weeks. Bus route 4 will divert via Gipsy Lane and Headington Hill.

Although it didn’t seem to make the mainstream news, there were reports of a meteor being seen widely across England on Saturday night. @jjhutchings wins the prize for the first report from Headington. 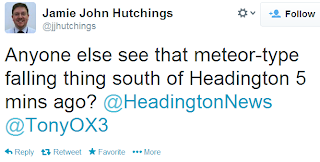