A cyclist was attacked in Barton Lane on Tuesday afternoon. A man knocked the cyclist off his bicycle and attacked him with a pair of scissors.

The three ladies of foodie blog @BittenOxford put @JacobsChopHouse to the test. Find out if it was a rare treat or if they gave it a roasting.

The Londis, run by @sundersandher, is being convertedinto a “One-Stop” shop. Sunder’s store in Leamington Spa became a One-Stop earlier this year and he has been enthusiastic about the change. One Stop is a franchise operation like Londis, and for those who get worked up about these things it is a subsidiary of Tesco, who are of course opening their own store on the other side of the road in July. 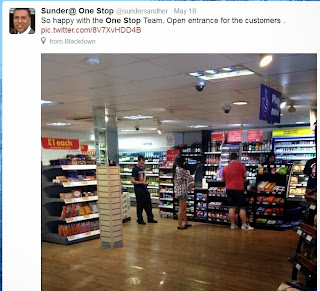 A U1 double-decker bus caught fire on the westbound A40 near Thornhill P&R on Friday afternoon. The A40 was closed for several hours and traffic was backed up to Junction 8 on the M40. None of the passengers was harmed. There’s no informtion yet on what caused the fire.

The opposite (eastbound) stretch of road was closed again on Sunday (yesterday) evening following a lorry collision and a diesel spillage.