Max Webb, aka SpiderMax, who lives in Headington and goes to Cheney School, is training to be a free-runner. He has landed a role as a stunt double in a major production due to be filmed later this year. He has also been part of the @MessyJamOxford street dance group run by @EshaMessyjam.

There’s been an wild outbreak of utility-type street marking in Sandfield Road, in yellow, white and blue. Who’s going to be doing what there and when was the question. @RuthWilk says it is preliminary survey work for a direct heat link between the JR and the Churchill. I’ll try to find out more. Similar markings have appeared in Latimer and Stapleton too, which seems to back up the heat-pipe story. 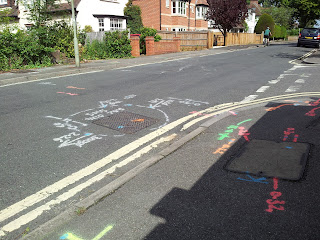 There are fresh markings too in nearby Staunton Road. These seem to be to do with moving/replacing the street lights.

A local 13 year old boy, Aown Dogar, died after falling into the Thames near Donnington Bridge on Thurdsay evening. He was pulled from the river and taken to hospital but failed to recover. Aown went to Cheney School and had recently played his first competitive match for Quarry Rovers under-15s. Details are not clear but police are not treating his death as suspicious.

The solitary post on the Headington & Marston e-democracy forum this week: