Some of my earlier posts have gone out of sequence. Sorry for any confusion while I try to fix things.

In one sense it’s been a quiet week for Headington news. In another sense, Headington had more twitter mentions in two days than in a normal year. Something to do with rioting, it seems. Anyway, while false rumours of trouble in Oxford swirled and raged around the internet the real-life city stayed fairly quiet.

Police were called to reports of an arson attack on Monday night at McDonald’s in London Road, Headington shortly after midnight. Three people have been arrested. Police were also called to a car fire in Barton Road, Barton after a black VW Polo was set alight.

Prompted by the actual and threatened public disorder Thames Valley Police (@ThamesVP) split out a series of local twitter accounts. Oxford City police started tweeting as @TVP_Oxford and joined a number of other local tweeters in trying to calm nerves and sort out truth from rumour.

The Headington shark’s owner @Bill_Heine celebrated its 25th anniversary on 9 August with a street party. Local dignitaries mingled with locals to honour the occasion. The story of the shark. Pictures from the party. And my own picture: 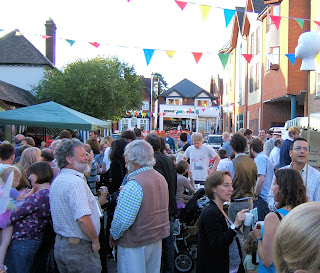 @sharksandlasers and a website “The Dorsal Fin” provided more unexpected coverage of the event.

The official opening of Bury Knowle Park play area will be in a month’s time, according to the Oxford Mail.