@TVP_Oxford are appealing for information on three separate incidents. There was another robbery/burglary in Sherwood Place, Barton on Sunday 12 August. Also over that weekend there were three thefts from vehicles in Cheney Lane. Then in the early hours of Tuesday morning there was an assault & attempted robbery in Hollow Way.

@oxford_brookes released a set of architectural pictures (and some pictures of tea) showing off their new Abercrombie Building.

The Sikhs have started using the old Sharpe+Howse plumbers’ merchants building on the London Road as their new Gurdwara (temple).

On Armistice Day in 1950 four trees were planted around Marston to commemorate those from the district who died during the Second World War. People have been worried that the one outside the old Friar pub would be felled or damaged when Tesco build their planned store there. Independent councillor Mick Haines is using some of his discretionary Ward money to install a plaque marking the tree in an attempt to protect it permanently. The Oxford Mail article mentions the locations of the other trees.

@RuthWilk reported a good turnout for the Ward Focus meeting on Tuesday to discuss parking and related issues.

Caffè Corsica was open again by Wednesday. @amhogarth and @joe_bwab were among the first to try the pizza: they reported enthusiastically.

Work was done to raise and resurface the pavement and entrance to the service road on Old High Street between Monaco and Waitrose. Hopefully it will mean an end to the puddle, but more work is still needed on the drainage around the main crossroads. 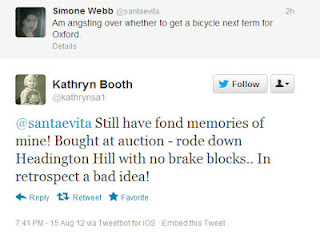