On Monday morning two armed men threatened staff of Lloyds TSB and escaped with an undisclosed amount of money.

Gregg’s was once again obliged to close because of a pigeon which keeps getting into the shop. Food safety regulations mean they then have to throw away any uncovered food – which the pigeon then goes round the back to eat according to a writer on the H&M e-dem forum. It’s easy to laugh but it’s not much of a joke really. The story escalated during the week, with coverage on @PhilGayle‘s morning show on @BBCOxford radio on Thursday.

A man had to be cut free from his car after a two-car collision in Girdlestone Road on Saturday afternoon.

@LaurenceReade wrote a nice memoir and appreciation of Headington Quarry, followed by another on Risinghurst and C S Lewis.

Caffè Corsica, the Pizza café on London Road, seems to have closed. The interior has been stripped and there is a Chancellors’ ‘For Sale’ sign (commercial premises and flat over) above the shop.

Chinese take-away OxyBox opened in Marston (Marston Road, near the junction with Cherwell Drive). They already have an established branch in Kidlington.

At the time of writing there’s no report from the meeting on Friday where Oxford City councillors were being asked to agree the sale of Bury Knowle Stables and Barn. The competitive bids were inadvertently published online and were visible for a few hours before being hastily taken down. No, I didn’t see them.

Osler House (on the JR Hospital site just off Osler Road) has got a new licence for plays, films, sporting events, dancing, live music and alcohol. You may remember they are keen to attract more outside bookings.

Headington School (@HeadingtonSch) came back to twitter after an absence of 9 months. One of their ex-students Sophie Sumner (@sophiesumner8) who grew up in Oxford won US reality TV show “America’s Next Top Model” last year.

The school was also a venue for the first of two weekends of the Oxford Music Festival. The other venues are @JdP_oxford and Keble ‘not on twitter’ College. The Festival Concert will be held in the Jacqueline du Pré Music Building (@StHildasOx) on Sunday, 10th February at 6:00 pm.

Windmill Road building supplies firm @Blanchford popped up on twitter again after posting just three tweets about 9 months ago. Let’s hope they stick with it this time!

If like me you were wondering what had happened to the helpful older man who worked in the mornings as car park attendant at the Manor Surgery, I can report that his job finished at the end of September last year. He told me he is keeping well and misses his job, though not in the recent cold weather!

6th Headington Guides are to receive an £800 grant from @OxfordshireCC‘s Big Society Fund. Their application was supported by County Councillor Roz Smith.

It was reported that HM Treasury is taking over the sale of Warneford Meadow from the Dept of Health. Good thing for the Friends? Bad thing? Don’t know. 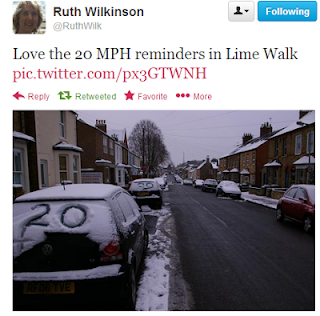 One thought on “Headington Headlines #96”