Since I wrote a fortnight ago about the heat pipe being installed between the JR and the Churchill, work has been going ahead and a bit more information has come to light. Here’s what the work in the JR grounds looked like last week. 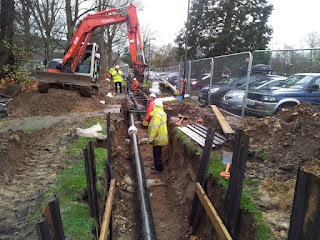 As you see, the trench is about a metre deep here. Obviously the depth will vary once the digging starts in the public roads depending on how the pipe negotiates its way over, under or round all the other services buried there.

We now know that the two pipes (a flow and a return) are 150mm steel pipes with a factory fitted insulated coating taking the overall diameter of the pipes to 280mm (about a foot).

The heat pipe link is part of a larger scheme costing £14.8m, funded from a Government grant [correction 1/12/15 – the funding is not from a Government grant, it’s from somethig called the Carbon & Energy Fund which has access to commercial loans for “green” projects], designed to upgrade the heating and hot water systems at the two hospitals. The scheme is designed to save energy, reduce reliance on the national grid especially at times of high demand in the winter, and to reduce carbon emissions. [Source: OUH NHS Trust Board meeting, September 2015].

These are worthy objectives, which makes it even more of a shame that the Trust has chosen not to talk to the people who live in or near the areas affected – Sandfield, Latimer, All Saints and Stapleton Roads – or the general public in these parts of Headington. There are understandable concerns about access to properties, disruption, parking, possible road closures, congestion and so on. The lower end of Sandfield Road is already an obstacle course used by residents, rat-runners avoiding the Headley Way traffic lights and people going to Beech Road, the Manor Hospital and the Beech Road flats. The corner of Latimer and London Roads may be a building site at the same time as the pipe is being laid there – or maybe not. The trouble is no-one knows.

I expect these issues can be resolved, but while the Trust remains silent rumours will circulate and anxiety will grow. The story was covered on BBC Radio Oxford this morning, where the presenter said they had asked the Trust for a response but they had declined to appear on the programme. An announcement has apparently been promised, and possibly some kind of exhibition, but why this didn’t happen two months ago is a mystery.