Headington’s Londis closed down last Sunday (27 July). It now stands empty and its future is uncertain.

As one door closes another opens. The new Tesco Express opened on Tuesday morning. The store and its manager are on twitter as @Tesco6880. Also ‘Headington’ is apparently ‘Area 5‘ in Tesco-speak.

Multiple reports of a Big Pong across Headington on Monday evening attracted interest from @BBCPhilGayle and the Oxford Times. Unconfirmed explanations included muck-spreading in the Barton fields.

A van overturned on Jack Straw’s Lane on Tuesday.

The Barton Community Association is reported to be thinking of starting the process of forming a Parish Council. Still some way to go before it happens.

Not news, but a round-up of views on the Barton Park link road as developers confirm a planning application is scheduled for later in the year.

Headington School @HeadingtonSch celebrates its centenary next year and has a website dedicated to the event.

Vice-Chancellor Janet Beer is leaving @Oxford_Brookes at the end of January 2015 to take up the Vice-Chancellorship of Liverpool University. 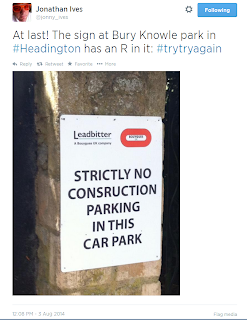