The Sunday Times forgot to mention the amazing coverage of local issues enjoyed by residents of Headington as one of the factors that makes Headington one of the top 50 places in the UK to live. The list was in alphabetical order, so being number 44 doesn’t mean anything. Thanks to @headingtonnews for sending me the cutting. I had to look up ‘Tiger Parents‘. 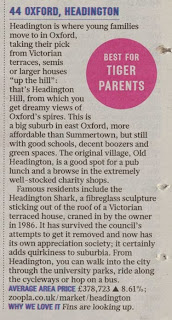 And the work to upgrade the Risinghurst – Quarry crossing at Kiln Lane to a toucan (that’s bikes as well as people on foot) was completed four days ahead of schedule.

Children at @WindmillOxford celebrated World Book Day on Thursday by dressing up as their favourite book characters.

A new noticeboard has appeared on the corner of Headington Road and Headley Way. As of Saturday mid-day it was still empty (and graffiti-free).

Fire services were called to a house fire on Colemans Hill (off Pitts Road) on Sunday evening. @philmercer broke the story.

The City Council is consulting on the plans for a pavilion in the Margaret Road recreation ground. There will be a public event to show the plans on 31 March at 6.30pm in @TheMasonsArmsHQ.

Oxford LibDems announced that their PPC for Oxford East, Mark Mann, has stood down for family reasons. The new parliamentary candidate is Alasdair Murray @alasdairjmurray. He lives on Hill Top Road, which is almost in OX3.

The Albany Care Home on London Road was once again criticised in a CQC inspection report. After two earlier critical reports (see HH193) a surprise inspection was carried out in January this year. In the latest report leadership at the home was rated “inadequate” and safety, care and responsiveness of care “require improvement”.

Medical services for @BartonPark_ will be provided by expanding the existing Barton Surgery in Underhill Circus.

Jolie Kirby, the Headteacher of Cheney School, threw down the gauntlet in front of some of the local competition when she declared parents should not “waste their money” on private education.

This hubris was followed by its nemesis when police were called to the same school last Monday after a report that a 16 year old pupil had been attacked in the school grounds. It seems no-one is prepared to give any more information about the incident.

Birmingham City Council has put the Stansfeld Centre off Quarry Road on the market. Friends of Quarry have had it designated an Asset of Community Value. I wrote this short note on what happens next.

Following complaints from the public, including @HeadingtonHeritage, about their visual impact solar panels on the roof of the new buildings facing Bury Knowle Park will be removed. It seems the proper planning procedures were not followed.

A woman gave birth to a baby boy in a taxi outside Leaders in Windmill Road on Wednesday morning. A paramedic attended and mother and baby were said to both be well. Reporters at @TheOxfordMail who had worked a 16 hour day the day before getting their 13-page coverage of the Bullfinch report ready were in a more relaxed mood as this story broke.