Headington Headlines has made it to 300 editions! Here is your weekly round-up of local news for 9 – 15 January. First – roadworks …..

The work installing the heatpipe has slipped behind schedule. Work in Latimer Road has been delayed by two weeks, and in Lime Walk one week. Work in Sandfield Road is still expected to start today (16 January). This blog post has more details.

The County Council has published plans under the Access to Headington scheme to make an eastbound bus lane in Roosevelt Drive between the Old Road Campus and Churchill Drive. The lane would operate between 3pm and 6pm, Monday to Friday, and during those times only buses and emergency vehicles will be able to leave the Churchill site by that route. All other traffic will have to leave via Roosevelt Drive westbound to the Old Road junction. Consultation on this plan is open – the county says “objections to the proposals and other representations, specifying the grounds on which they are made, may be sent in writing (quoting ref: AK/12.6.320) by 3 February”.

In February the sections of Warneford Lane/Gipsy Lane/Old Road/ Roosevelt Drive which are being remodelled as part of Access to Headington will be closed overnight for about six nights for resurfacing. 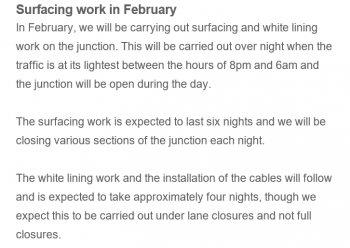 A VW Polo was stolen in Burchester Avenue, Barton a weeks ago (Sunday 8 January) after its owner left it with the engine running while it defrosted.

The saga of the Jack Russell pub in Salford Road, Marston goes on. After the empty building was burnt down in an arson attack in November the owners have submitted a new planning application (ref: 16/03108/RES) to build a three-storey block of 16 flats on the site. Some locals including independent councillor Mick Haines are still campaigning for the site to be used for community facilities. According to the Oxford Mail others think the need for more housing is more important.

The planning application to build next to the C S Lewis nature reserve in Risinghurst has still not come before councillors. It was not on the agenda for the East Area Planning Committee on 11 January, although it is listed for consideration at a future, but unspecified, date. Searching the Charities Commission website for the “Wychwood Foundation” still returns a blank. Earlier posts on this story here and here.

As pressure on the NHS builds, all non-urgent operations and related procedures at the JR were cancelled on Friday and again today (Monday).

Bar Meze scored only 2 out of 5 in a hygiene inspection last November. The manager is confident he’ll do much better when it’s reinspected.