Oxford East MP Andrew Smith has announced he will not be standing for re-election on 8 June.

A message to my constituents pic.twitter.com/LocKjz1JNT

Andrew’s replacement as Labour’s candidate will be chosen by Labour at national level, not by the local party. Andrew was nice about it in a television interview I saw but I can imagine not everyone in Oxford would say the same. South-East MEP @AnnelieseDodds has said she is very keen to be selected, but we’ll have to wait and see.

Artisan distillers @thespiritoftoad who are converting buildings at the top of South Park into a distillery (see the original story in HH 269, 286 and 287) have submitted a planning application (ref: 17/00913/FUL) for the “Erection of Visitor Centre comprising cafe/restaurant, tasting room and bar for distillery and public conveniences”. Fans of the Oxford comma might snort lightly at this point. The picture is from the planning application. The window for comments closes on 15 May.

Back in February last year I reported that an organisation called Chapel Street Community Schools Trust was hoping to open a new Free School in Headington. There were some reasons to be dubious about the proposal, and now it seems it’s not going to happen.

Headington resident Ben McFadyean is one of the leading lights behind a multi-cultural football tournament happening at Iffley Road Sports Ground on Sunday 7 May starting at 9.30am. The winning team in the 8-a-side tournament will be presented with a trophy at the Kassam Stadium.

A voluntary smoking ban in the City Council’s children’s play areas, trialled in Sandfield Road and elsewhere, has been rolled out across the whole city. This includes Bury Knowle Park, obviously. Although vouluntary, the council hopes it will encourage people not to smoke in the children’s areas.

Nasher, aka Brian Nash, guitarist from Frankie Goes to Hollywood, performs @TheMasonsArmsHQ on Saturday 6 May. 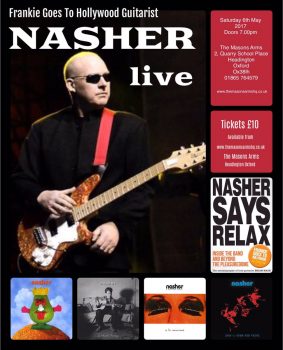 The saga continues. The dangerous wall at 29 Old High St #Headington has been made safe by @OxfordCity pic.twitter.com/RkRWuas5lq

This is surely a record! For the second week in a row there have been no posts on the Headington & Marston e-democracy forum.